Shares of U.S. exploration and production company Centennial Resource Development (NASDAQ:CDEV) rallied roughly 15.5% in the first half hour of trading on Dec. 9. Following close behind were Callon Petroleum (NYSE:CPE) and SM Energy (NYSE:SM), up about 12% apiece. Bucking the rising tide, however, was Talos Energy (NYSE:TALO), which plummeted as much as 19% when the trading day got underway. Here's what to make of this divergent action.

Centennial, Callon, and SM Energy are all tiny and highly leveraged energy companies. To put some numbers on that, their market caps range from around $500 million (Centennial) to a little shy of $700 million (SM Energy). Compared with industry giants like Chevron (NYSE:CVX), which has a nearly $180 billion market cap, they are small-fry players. But that hasn't stopped them from taking on a material amount of leverage. Centennial Resource Development is at the low end of the trio with a financial debt-to-equity ratio of 6.5 times, and Callon is at the high end with a ratio close to 17 times. For reference, Chevron's financial debt-to-equity ratio is just 0.26 times. That's a huge difference. 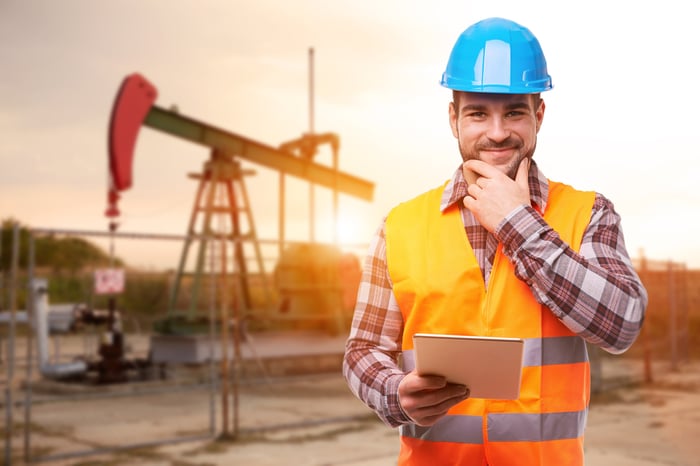 The small and leveraged theme plays out in the volatility of these stocks, which tend to rise and fall dramatically on news and, as you might expect, swings in oil and natural gas prices. Today energy prices have been moving higher and so, too, have the shares of Centennial, Callon, and SM Energy. The logic is pretty simple: Higher oil prices will make it easier for these little guys to muddle through the current energy sector downturn. But what about Talos Energy?

Although it operates in the Gulf of Mexico and not in the U.S. onshore space, Talos Energy's market cap is roughly $640 million and right in line with the other three names here. Its financial debt-to-equity ratio, meanwhile, is roughly 2.1 times, which compares favorably with these onshore peers. Nothing particularly bad happened in the offshore space today, either, so it wasn't industry news driving the decline. Given rising commodity prices, you'd normally expect Talos' stock to be heading in a positive direction. The sell-off is because Talos announced that it has priced a stock offering for 8.25 million shares, with the underwriter receiving the option to buy an additional 1.2735 million shares.

The purpose of the stock issuance is to raise cash to pay down debt, but it comes at the cost of diluting current shareholders. That's usually not looked at as a positive development; thus, the stock fell sharply even though the cash will help Talos pay for acquisitions and investments it has made during the downturn. Such countercyclical moves suggest it could come out the other side of this difficult period a stronger company than when it entered. But selling stock when your shares have fallen roughly 70% from their early-year highs is a pretty concerning development. So it really does make sense that investors were in a negative mood here.

Small energy stocks have been very volatile lately, with little more than news or commodity swings leading to massive up and down days. That's likely to continue for the foreseeable future. Investors looking at the energy sector for bargains should probably stick to the largest and financially strongest names, like Chevron. Even for a company like Talon, which appears to be making reasonable strategic moves to position its business for the future, the situation can turn in an instant.