Shares of Editas Medicine (NASDAQ:EDIT) were up 13.9% as of 10:47 a.m. EST on Wednesday. This marked the third consecutive day of double-digit gains for the stock after Editas announced new data over the weekend for its experimental gene-editing therapy EDIT-301 at the American Society of Hematology (ASH) annual meeting.

There are probably two factors at play with Editas' big jump over the last three days. Obviously, investors remain bullish about the prospects for EDIT-301. Editas reported high levels of gene editing in red blood cells of patients with sickle cell disease. This editing resulted in what the company called "remarkable correction" of sickle cell disease in cells. 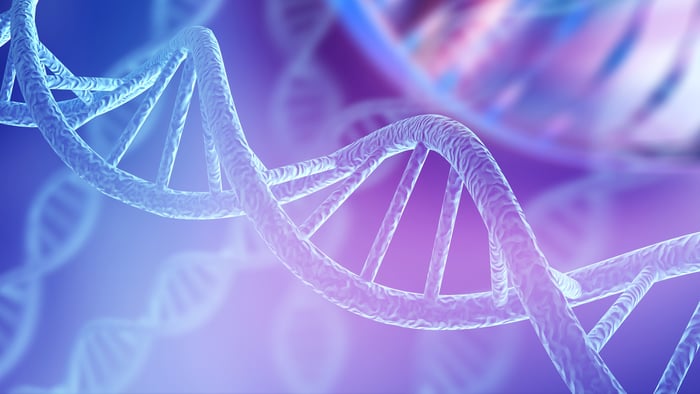 The second factor is that Editas has underperformed the other leading CRISPR gene-editing stock so far this year. CRISPR Therapeutics' (NASDAQ:CRSP) shares have skyrocketed close to 150% year to date while Editas' shares are now up more than 60%. Like Editas, CRISPR Therapeutics has a gene-editing candidate targeting sickle cell disease and related rare genetic blood disorder beta-thalassemia.

CRISPR Therapeutics' program is farther along than EDIT-301 is and has had positive results so far from an early stage clinical study. That's the main reason its shares have risen more than Editas. However, my hunch is that the latter's latest announcement has caused many investors to recognize the potential that Editas has. And that's helped the biotech stock start to catch up with its rival's stock performance.

It's important to remember, though, that EDIT-301 is still only at the preclinical stage. Editas does have another program, EDIT-101, that's being evaluated in an early stage clinical study targeting rare genetic eye disease Leber congenital amaurosis type 10 (LCA10).

The next potential catalyst for Editas could be right around the corner. The company expects to file for approval with the Federal Drug Administration (FDA) by the end of 2020 to begin a phase 1/2 study of EDIT-301 in treating sickle cell disease.