The retailer says it is investing in 26 new wind and solar projects.

With a newly announced slate of green energy investments, Amazon ( AMZN 1.72% ) is now the world's top corporate investor in such technology, the company said in a press release distributed on Thursday.

The giant retailer's new projects comprise 26 new energy-generation facilities powered by either wind or solar. All told, the production capacity of the 26 is 3.4 gigawatts of electricity. With these, Amazon's overall involvement in renewable energy for 2020 comprises 35 projects that collectively have over 4 gigawatts of capacity. 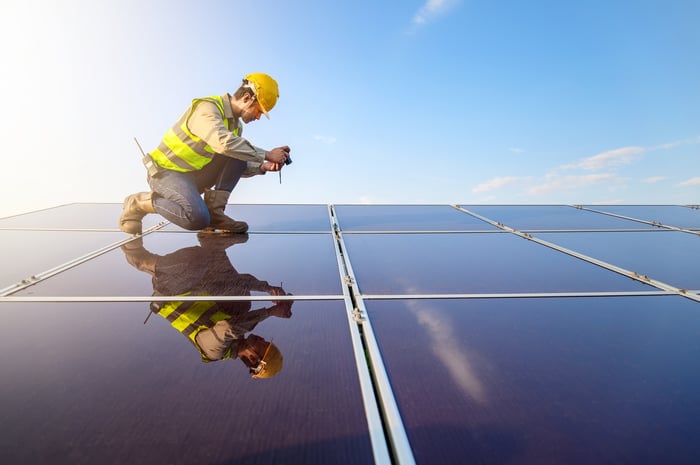 The new projects will help power the company's massive and ever-growing portfolio of physical locations. These include offices, warehouses, and the electricity-hungry data centers at the heart of its powerful Amazon Web Services (AWS) business.

They will also help the company reach its stated goal of net-zero carbon emissions by 2040. Amazon said it is now on track to generate its infrastructure purely through renewable sources by 2025; the original target was 2030.

In 2019, Amazon and Global Optimism, which describes itself as focused on social and environmental change, established an initiative known as The Climate Pledge, a shared commitment to reach that net-zero carbon emissions goal by 2040.

According to the company, The Climate Pledge currently has 31 signatories, a list that includes other top corporations such as software giant Microsoft, global consumer goods company Unilever, and fellow retailer Best Buy.

"This is just one of the many steps we're taking that will help us meet our Climate Pledge," Amazon CEO Jeff Bezos was quoted as saying. Bezos added that with the new investments, his company now has a total of 127 wind and solar power-generation projects.