Gaming was one of the few industries to indirectly benefit from the COVID-19 pandemic in 2020. Due to an increase in free time fostered by increased unemployment and government-mandated lockdowns, games produced by the likes of Activision Blizzard (NASDAQ:ATVI) and Electronic Arts (NASDAQ:EA) experienced a boost in popularity.

However, since vaccines nearing approval are showing promise of combating the pandemic, investors have to wonder if the excitement for gaming will remain as contagious. They also might ask whether Activision or Electronic Arts is a better stock to own under such conditions. 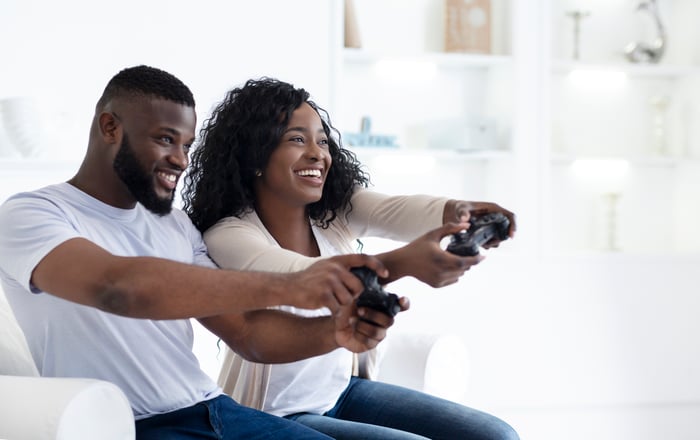 The state of gaming

Given the state of both the world in general and the gaming industry in particular, both stocks should benefit. For one, COVID-19 has caused lockdowns, canceled outdoor events, and created a boom in the number of people working from home. Under such conditions, consumers have had more available time for gaming.

Moreover, Grand View Research forecasts a compound annual growth rate of 13% for the video gaming industry through 2027. Fortunately, both companies have positioned themselves well to take advantage of this rising popularity.

Additionally, upgrades in gaming consoles this year should provide further incentive. Both Sony and Microsoft released next-generation game consoles in November. As many gamers choose to upgrade to the PlayStation 5 or Xbox Series S/X, demand for games compatible with these systems will likely rise.

Although both companies continue to release new games from popular franchises, investors see an increasing divergence in some of the numbers.

Activision's revenue increased by 52% from year-ago levels. Diluted earnings per share rose by 132% to $0.88 per share over the same period.

This stands in contrast to Electronic Arts, which experienced a 15% drop in quarterly revenue compared to the same quarter last year. The company blamed falling revenue on delayed game launches. This caused diluted earnings per share to fall 78% over the same period to $0.63 per share.

About the only similarity came in company valuations. Activision currently trades for about 24 times forward earnings. That is not significantly higher than Electronic Arts' forward P/E ratio of 22.

Moreover, if the company outlooks serve as an indication, the trends from the previous quarter will continue.

Electronic Arts expects the declines to continue. Next quarter's outlook points to $1.7 billion in revenue and earnings of $0.61 per diluted share. In the year-ago quarter, the company earned $1.18 per share on about $1.6 billion in revenue.

Given Activision's more robust performance, one might expect it to have much greater returns. However, Activision's stock price has risen by about 38% this year, compared with a roughly 22% bump for Electronic Arts. Both companies have outperformed the S&P 500 in 2020. 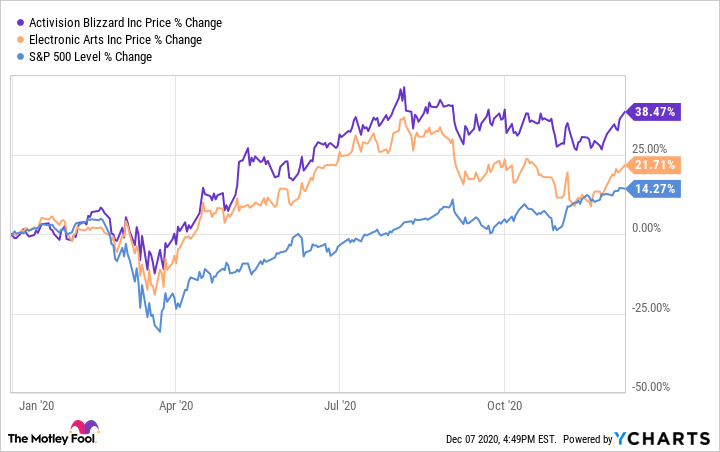 Given the overall growth of gaming, both stocks should continue to outperform the S&P 500. Still, between the two, Activision Blizzard is the obvious choice.

The financials of both companies are solid but have small issues. Nonetheless, since investors pay close to the same multiple for each stock, I recommend the one with higher revenue and earnings growth.

Admittedly, Electronic Arts' earnings blip might disappear as the company releases more games in the upcoming quarter. Still, even when excluding such tax-related benefits, Activision has typically produced higher growth rates. It also holds a more diverse library of successful franchises. This should keep Activision in better shape as the industry moves past the pandemic.