Please ensure Javascript is enabled for purposes of website accessibility
Log In Help Join The Motley Fool
Free Article Join Over 1 Million Premium Members And Get More In-Depth Stock Guidance and Research
By Rich Duprey - Dec 10, 2020 at 9:56AM

Unprecedented demand for guns has been lighting up the firearms industry.

The immediate future for Sturm, Ruger (RGR 1.52%) is exceptionally bullish. Investors can look forward to seeing high sales, high profits, larger dividend payments, and a stock price that's likely to shoot out the lights next year.

Yet although 2020 started off with the same optimism, you might be surprised to find out how much money you would have right now if you had put $1,000 into Ruger on Jan. 2. 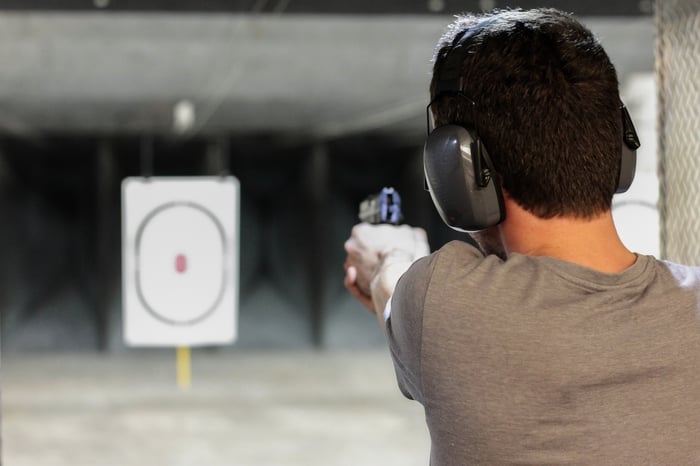 A tinder box of opportunity

Gun sales came out of a three-year slump with a vengeance and inventory at Ruger's distributors was mostly depleted. Because Ruger doesn't sell firearms directly to the public, but rather only to federally licensed dealers and retailers, low inventory levels with growing demand were a perfect combination to send sales soaring.

Ruger entered a presidential election year as contentious as 2016 had been, but with a pandemic, a shutdown of the economy, and resources suddenly going scarce added to the mix. Riots and civil unrest broke out in major cities leading some politicians to call for defunding the police.

Consumers raced to the gun stores to arm themselves, and the National Shooting Sports Foundation says 7.7 million people bought their first gun this year as they sought to take protection of family and property into their own hands.

Ruger sales surged 53% and profits rocketed 500% higher amid "unprecedented demand." Its stock followed, nearly doubling in value by August, though it has steadily declined since. While a $1,000 investment would have turned into $1,900 at its peak, today it would be worth only $1,333, or 30% less.

It's still a 33% gain and handily beats the S&P 500's performance, yet it's still a deeply discounted stock heading into the new year.