This year has been difficult for the financial sector. COVID-19 has caused problems for almost every firm with credit risk, especially banks and real estate investment trusts (REITs). About the only group that has done well is mortgage originators, who are having a year for the ages. Another that has done surprisingly well is auto finance.

One company with a hand in both sectors is Ally Financial (NYSE: ALLY) -- the old General Motors Acceptance Corp. (GMAC) and one of the oldest auto finance companies in the United States, going back a century. Other than a few months early in the crisis, the auto sector has regained its footing, and the lending business is doing well. But is it a buy? Despite COVID-19, the auto finance business is performing well

Despite COVID-19, Ally has been performing remarkably well. During the third quarter, Ally originated $9.8 billion in auto loans, which was the highest level in five years. On the earnings conference call, CEO Jeffrey Brown said "overall dealer profitability rebounded to the highest levels in several years during the quarter, more than offsetting a difficult Q2." Auto sales recovered quickly, showing year-over-year gains in every month after May. The big question is how much of that recent growth is just "catch-up" from the bad spring sales. We will probably need a few more months of auto sales numbers to get a better indication. 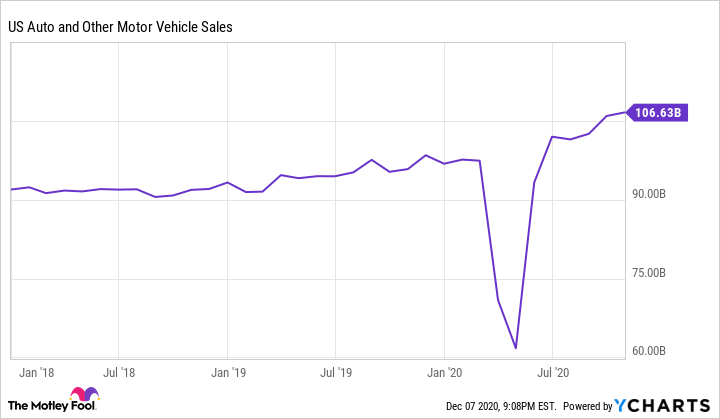 US Auto and Other Motor Vehicle Sales data by YCharts

In addition to strong volumes, the company only wrote off 0.64% of its portfolio as bad loans, which was a sizable decrease compared to a year ago. The auto lending business drove overall earnings per share up 26% year over year to $1.25 per share.

During the quarter, Ally originated about $1.3 billion in mortgage loans, which was up 63% compared to a year ago. While this growth rate is indeed impressive, the total volume the company is doing in this sector is dwarfed by its competition. Crosstown rival Rocket originated $89 billion last quarter. Its numbers were up 122% on a year-over-year basis. According to the Mortgage Bankers Association, the typical independent mortgage originator did $1.34 billion in the third quarter. In other words, Ally was distinctly average, at least in this business line.

Ally is expected to earn $2.39 per share this year, which is a 36% decline compared to 2019. The street expects earnings to rebound back to 2019 levels next year, which gives Ally a price-to-earnings ratio of 8.8 times. This is a reasonable multiple for a financial stock. Ally pays a $0.19 quarterly dividend, which gives the stock a yield of 2.4%. The investment risk for Ally is an extended period of economic weakness which begins to drive up charge-offs. Ally's charge-off numbers look attractive compared to a year ago, but it is still early in the economic recovery.

Ally looks expensive based on a trailing basis; however, the unusually low earnings in 2020 are exaggerating the multiple. Based on the 2021 earnings multiple of 8.8, Ally is trading close to the middle of its historical range. 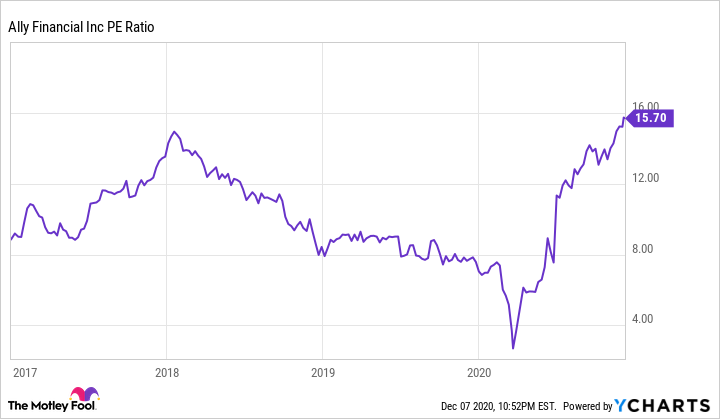 I would be more excited about Ally if it was taking bigger advantage of the current once-in-a-generation mortgage refinancing boom. This period is expected to last several more years, provided that the Fed cooperates and keeps interest rates low. Putting up $1.34 billion in origination volume is average, but Ally shouldn't just be average. The brand name alone should have it competing with the heavyweights like Rocket and PennyMac Financial Services. If I were giving the stock a buy, sell, or hold recommendation, I would give it a hold.