Shares of digital clothier Stitch Fix (NASDAQ:SFIX) languished in the first half of 2020, but the second half of the year was a different story. The stock has doubled in value since the summer and skyrocketed past all-time highs not seen since way back in the summer of 2018. Given the company's momentum headed into 2021 and new trends emerging in the retail world, this e-commerce company's run looks far from spent.

Capitalizing on new trends in apparel

According to data compiled by the U.S. Census Bureau, online-only merchants have (unsurprisingly) been the best-performing segment of retail in 2020 year to date with sales up 22% year over year. Clothing and accessories have been the worst-performing category with a terrible 30% year-over-year decline.

Stitch Fix is at the intersection of these two diverging segments of the retail universe, and its business performance this year has been a mixture of both. Full-year fiscal 2020 (the 12 months ended Aug. 1, 2020) revenue increased "only" 11%. Stitch Fix followed it up with a 10% year-over-year sales increase during its fiscal 2021 first quarter (the three months ended Oct. 31, 2020). But the company said it expects to grow the top line 20% to 25% during full-year 2021. As a result, shares of the online clothing company have jumped 65% following its first-quarter update. The stock has doubled in value since July as of this writing. 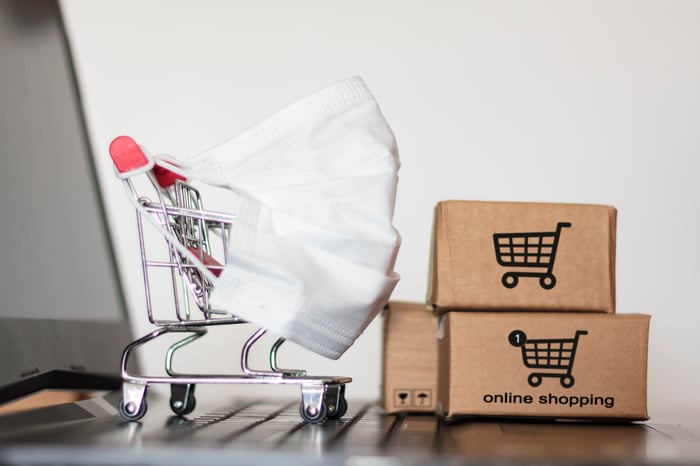 The surge in value can be attributed to Stitch Fix's outperformance relative to its peers. With so many consumers now working from home and social distancing, demand for clothing has been muted at best. But the resilient growth story here is a testament to shifts in spending habits favoring e-commerce that were already taking place before the pandemic started. Add in the AI-enhanced recommendation system and curated boxes of clothing for those who want some style help, and it's clear why Stitch Fix is winning market share -- and why it's poised to continue to do so.

From too expensive to too cheap to just right

The new digital era that is emerging certainly won't eliminate the need for nice clothing. In fact, I think it could boost demand for high-end clothing going forward. Fewer trips to the office and more time at home either reduces a household's budget for clothes or allows it to buy fewer (but nicer) ensembles. Paired with Stitch Fix's online operation and smart technology to help pair the right items to the right person, I'd much sooner buy into Stitch Fix than I would a floundering department store.

But is it a buy now after shares have zoomed back to all-time highs? I think it could be for the right investor: One who doesn't mind owning a small, disruptive, high-growth stock with above average volatility. At just 3.5 times trailing 12-month sales, Stitch Fix is still valued more like a traditional clothing retailer than a tech firm. Given gross margins on merchandise sold were just shy of 45% during the most recent quarter, that's a fair assessment since tech companies often have a gross margin well north of 60%. But with the company back in double-digit percentage growth mode, an argument could be made for a far higher valuation. After all, lululemon athletica -- another beneficiary from e-commerce -- has been growing far more slowly during the pandemic but trades for over 12 times trailing 12-month sales.

Granted, Stitch Fix is a much smaller company and barely turns a profit. Free cash flow (revenue minus cash operating and capital expenses) was just $12.7 million last fiscal year on revenue of $1.71 billion. But this metric could be getting ready to turn a corner in a meaningful way. In the fiscal first quarter, free cash flow rose 157% year over year to $51.4 million on revenue of $490.4 million. Growth before profitability is still the name of the game here, but its recent performance on the bottom line shouldn't be discounted too much.

A couple of years ago, Stitch Fix was priced to perfection, but perfection didn't ensue. But during the pandemic, it looks like Stitch Fix's massive outperformance relative to the clothing industry overall was being overlooked. At this juncture -- and with management forecasting at least 20% sales growth in the year ahead, $388 million in cash on the books, and no debt -- the stock still looks like a decent value with plenty of room to keep making waves in the retail industry.