Please ensure Javascript is enabled for purposes of website accessibility
Free Article Join Over 1 Million Premium Members And Get More In-Depth Stock Guidance and Research
By Zhiyuan Sun - Dec 11, 2020 at 7:20AM

There hasn't been an innovation in X-ray imaging in more than 120 years. This mid-cap medical device company seeks to change that -- with a bit of a caveat.

Nano-X Imaging ( NNOX -0.68% ) is quickly becoming one of the most talked-about companies in the entire healthcare sector, thanks to an upcoming binary outcome. It will either disrupt the entire global medical imaging industry with its invention, or fail spectacularly in a nonetheless glorious attempt.

At issue is its invention of a cold cathode X-ray tube for CAT scans. The current technology involves using a large amount of thermal energy to create an electron beam that forms the basis of the X-ray (hot cathode tube), which results in more than 99% of energy being lost as heat. Cold cathode tubes involve the application of an electric field to extract electrons from a metal to form the X-ray, dramatically increasing the device's energy efficiency.

If that sounds too good to be true, it really might be. Prominent short-seller Citron Research has labeled the company "a complete farce," with significant scrutiny of the company's science. Is the stock really about to take a steep plunge, or is its impressive 124% return since its August IPO justified with more to come? 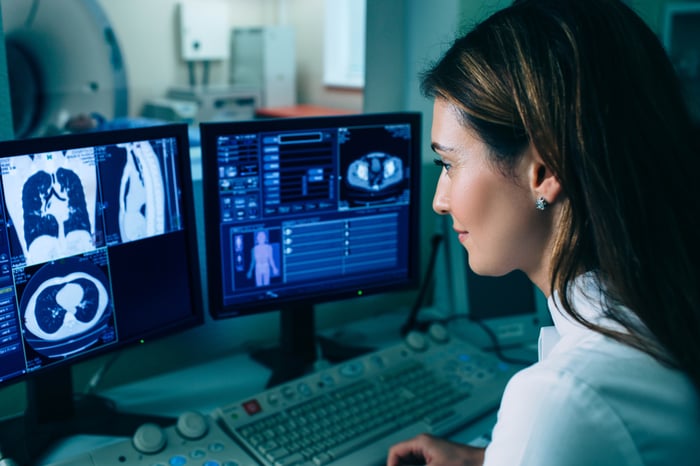 The case against Nano-X

Nano-X's market cap has surpassed $2 billion despite the company having no revenue or even a product that regulators have cleared. In its investor presentations, Nano-X claims that its product will be "significantly smaller" and "substantially more cost-effective" than existing X-ray devices. However, the company is a lot less enthusiastic in its Securities and Exchange Commission (SEC) filings. In these, Nano-X disclosed that it was not pursuing U.S. Food and Drug Administration approval for a novel product, but instead a 510(k) submission.

The 510(k) process allows the FDA to clear medical devices because they are "substantially equivalent to a legally marketed device." This is a straightforward and simple process to market a device. In fact, over 80% of medical devices in commercialization are cleared via the 510(k) pathway. Since the Nano-X device's specifications seem like it could revolutionize the X-ray industry, it is rather peculiar that the company chose this process instead of a novel product filing.

In an attempt to ease skeptics' concerns, CEO Ran Poliakine appeared live Dec. 3 during a virtual session of the Radiological Society of North America's annual conference to demonstrate the effectiveness of Nano-X's X-ray machine. The event was slightly underwhelming as device itself only scanned medical dummies.

Unfortunately, the demo did not solve the mystery. To date, Nano-X has not released any quantitative data describing the specifications of its device. Manufacturers of X-ray devices are required to submit performance tests with their applications for 510(k) approval. Among other things, the machine must meet a minimum threshold on a radiological image quality scale. The lack of published statistics on Nano-X's product is concerning.

The theme of the company seems to be secrecy at this point. If all of the above weren't questionable enough, also consider the company's business model. Nano-X does not want to sell its scanners to hospitals (the biggest potential revenue opportunity) and instead wants to loan them to remote, underserved clinics. The company claims its unconventional strategy will expand market outreach rather than compete with established X-ray devices.

The case for Nano-X

There are various proof-of-concept studies supporting the company's scanner. The invention itself is by no means recent. More than two decades ago, Sony appeared to have spent near $1 billion developing the project before abandoning it. The work in progress passed down into the hands of Nano-X's CEO and the original team of Japanese researchers who worked on it in 2012.

Back then, nanotechnology had not yet attained the ability to make use of of cold cathode X-rays. In addition, Sony's original purpose for the technology was to use it to enhance TV displays. However, the rise of LED technology rendered the use of cold cathode rays for TYV useless as the former had better performance.

Since the project changed hands, Nano-X has spent more than $65.4 million on total research and operating costs before bringing its scanner to the demo stage. Currently, the technology has the backing of Norbert Pelc, a professor of radiology at Stanford University. However, it is also important to note a potential conflict of interest here, as Pelc serves on Nano-X's advisory board.

Regardless, the company currently has 5,150 pre-orders of its device from health and imaging service providers worldwide, pending regulatory clearance. If successful, Nano-X estimates it can generate between $139 million and $1.2 billion in sales every year by charging a fee for every scan on those devices. It is unclear why the company decides to charge scanning commissions instead of flat-out selling the device.

On a final note, Nano-X does have a case for seeking its scanner's approval under 510(k). The real novel invention here is the cold cathode X-ray tube inside the device, and that element is exempt from the FDA's 510(k) review process for the X-ray device itself. It's one of many loopholes in the FDA's pathways to approval, and one can't really blame Nano-X for using it.

Based on the company's own projections, we will know by next year whether its device is, in fact, revolutionary, or whether it's the fake alleged by short-sellers. Very soon, shareholders could either be holding multibaggers or have lost a vast majority of their money.

If you cannot handle that type of volatility, then perhaps it's best to wait for the device to hit the market (assuming the FDA can clear it) before taking a position. Right now, there is just too much uncertainty and secrecy surrounding the technology for Nano-X to be a promising investment. It could make speculators rich, but there's no guarantee. It's really a coin toss at this point.

Why Shares of Nano-X Jumped More Than 16% on Wednesday