Deciding whether to invest in Nike (NYSE:NKE) or Costco Wholesale (NASDAQ:COST) is a tough choice. After all, both are venerable companies that have been successful for a long time. This isn't lost on the market, and their performances have rewarded shareholders nicely over the years. Over the last five years, Nike's stock has appreciated by 118%, while Costco's share price has grown by 134%. Both have trounced the S&P 500's 82% gain.

So, which one offers the better prospects to investors right now? Let's take a closer look at each company. 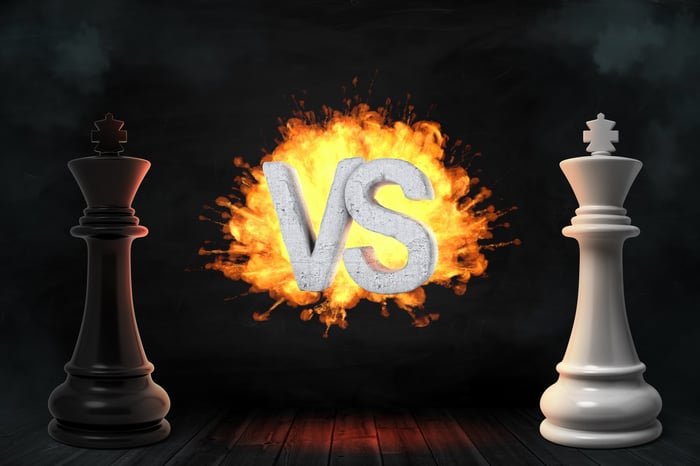 Nike continues to build on its success by putting out new products and getting the public's attention through athletes' endorsements, sponsoring events, and other examples of its vast marketing prowess. Nike products are sold across the globe online, and in its own and other retail stores.

But even Nike, with its well-regarded athletic apparel, footwear, and other gear, wasn't immune to the economic effects of the pandemic. The good news is that, with many stores closed, customers found a way to buy the company's goods. Its fiscal fourth-quarter digital sales increased by 79% compared to a year ago. However, this wasn't enough to offset lost sales from its retail operations, with the quarter's adjusted sales dropping by 36%.

But sales perked up as people were allowed to physically shop at retail stores. In the first quarter, adjusted sales were flat, even though retailers held back sales in order to implement various safety measures, such as reduced hours and a limited number of people allowed inside. This upward trend shows that the demand for its products is strong with only shoppers' lack of access limiting sales.

The company continues to execute its simple yet effective strategy. Costco has been steadily growing its paid membership, which is a testament to its ability to draw people to the low prices for its high-quality merchandise and services. It had 58.1 million members as of August compared to 47.6 million five years earlier. Not only is the company adding members, but it is doing a fine job of retaining them, too. Last year, its renewal rate was 91% in the U.S. and Canada.

Given a string of annual same-store sales increases, members are clearly finding Costco an attractive shopping destination. With all of this going for the company, it's no wonder it's been able to drive strong profitability increases; operating income grew by nearly 50% over the last five years to $5.4 billion.

There's no reason to think that Costco, a remarkably consistent company, won't continue replicating its success. After all, who doesn't like paying low prices?

Nike, with a growing online presence, expanding market share, and potential margin expansion, offers investors a strong potential return. It uses part of its cash flow to pay increasingly higher dividends to shareholders. Recently, the board of directors decided to raise the payout by 12%. Nike's dividend yield is 0.8%.

Costco, with its broad offerings and low prices that continue to draw and keep members, also provides an attractive investment option. Like Nike, it has a history of annually raising its dividend. Earlier this year, the company hiked it by 8%. Costco also provides a 0.8% yield.

This is a close call. But Costco also pays special dividends from time-to-time. Recently, it declared a $10 payment. With Costco's growth potential and the company's consistent results, I give it the nod.