Heading into a weekend with a highly anticipated test flight on its schedule, space tourism company Virgin Galactic (NYSE:SPCE) tried to keep a lid on expectations. "We will fly no earlier than Saturday," advised the company, and if the weather failed to cooperate, it might even need to "extend into next week."

As it turned out, the weather did cooperate Saturday -- but the test flight was a failure anyway.

Taking off from Spaceport America in New Mexico at 10:24 a.m. EST, everything seemed to go swimmingly at first. Virgin "mothership" Eve ascended smoothly to "release altitude," Virgin "spaceship" Unity detached from its mothership, and then ... nothing. 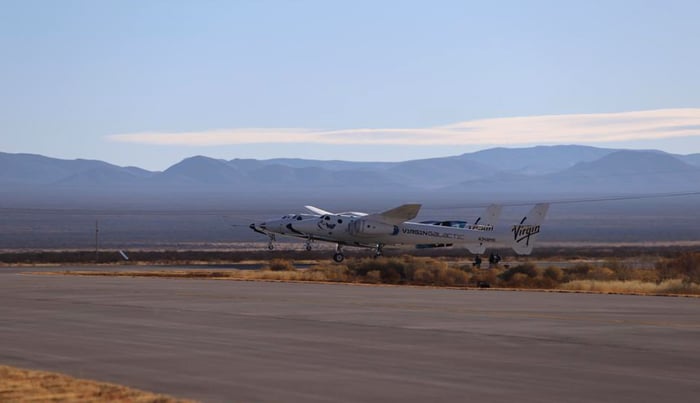 Unity's engine failed to ignite, and so, unable to reach space, VSS Unity turned back and glided down to land at Spaceport America. (Both pilots made it home safely).

Some initial confusion followed, but by Sunday, Virgin Galactic CEO Michael Colglazier was able to explain what happened. "After being released from its mothership, SpaceShipTwo Unity's onboard computer that monitors the rocket motor lost connection. As designed, this triggered a fail-safe scenario that intentionally halted ignition of the rocket motor," said Colglazier.

As it turned out, Saturday's mission failure was due not to a faulty engine, but to a communication glitch. Colglazier assured investors that Virgin is already "evaluating all the data" to prevent a recurrence and is already looking ahead to its next flight window.