Chinese electric-vehicle maker XPeng (NYSE:XPEV) said that it sold 55.2 million new American depositary shares at a price of $45.00, raising about $2.45 billion and suggesting that investor interest in the company's stock remains high.

XPeng is one of several electric-vehicle makers that have recently moved to raise additional cash with follow-on offerings of stock, taking advantage of intense investor interest in the sector, and the correspondingly high valuations for their companies, to pad their balance sheets and fund future-product initiatives.

Among them: NIO (NYSE:NIO) said on Monday that its own offering will raise about $2.65 billion when it closes later this week; Li Auto (NASDAQ:LI) raised about $1.5 billion earlier this month; and sector leader Tesla (NASDAQ:TSLA) raised about $5 billion via an at-the-market offering last week.

XPeng plans to use the proceeds to fund the development of new vehicles and technologies, to expand its sales and service network, and possibly for strategic investments in other companies in its space. 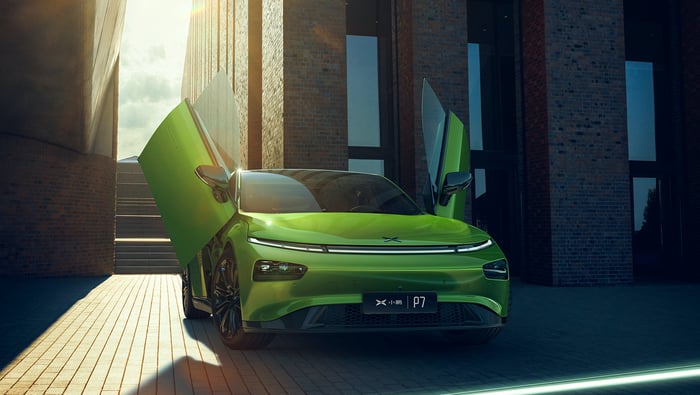 XPeng's stylish P7 electric sedan has sold well since its launch in June; the company is now working on a follow-up. Image source: XPeng.

XPeng's offering was "oversubscribed," meaning that the underwriting banks chose to purchase extra shares. XPeng had initially offered 48 million shares, with its underwriters having the option to purchase an additional 7.2 million.

That the underwriting banks — Credit Suisse, J.P. Morgan, Bank of America, and Citigroup — chose to exercise that option indicates that their clients were eager to purchase XPeng's new shares.

The price of XPeng's offering may have been a factor in the demand. The offering price of $45 was set last Wednesday before the market opened, and represented a 7.6% discount to the stock's Tuesday closing price of $48.69.