You probably wouldn't want to buy stock in an unprofitable company that's posting declining trailing revenue while also crashing in value by more than 62% over the course of the year -- especially when there are several sector competitors that don't have these dubious distinctions.

Aurora Cannabis (NASDAQ:ACB) is the stock sporting all of these red flags today. Thankfully, there are a few companies that are more appealing to investors who want to get in on the marijuana market gold rush that may electrify 2021. They're by no means perfect picks, but in the wild world of marijuana investing, they're as close as they come. 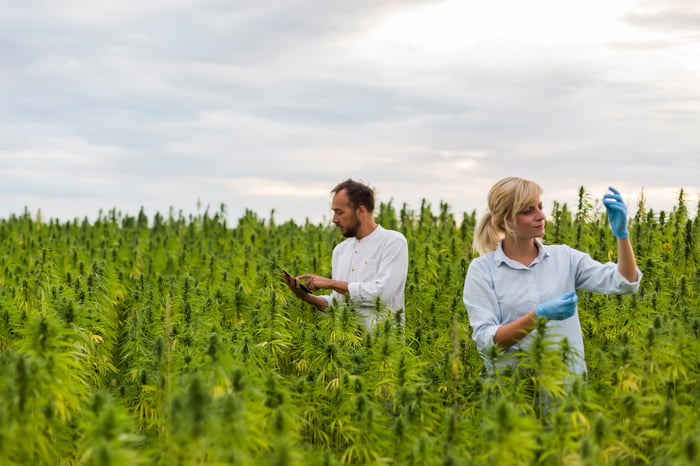 U.S.-based Cresco Labs (OTC:CRLBF) is on an accelerating growth trajectory. Unlike Aurora Cannabis, its trailing revenue has increased by a sharp 176.4% this year, won in part by its strong coverage of wholesale and consumer retail locations in some of the most populous U.S. states. And the company's earnings are expanding alongside its revenue; it reported a record $46.4 million in adjusted earnings in the most recent quarter.

Cresco has one problem in common with Aurora: Unprofitability. Nonetheless, Cresco has spent the year making prudent cuts to its selling, general, and administrative (SG&A) expenses. So, this company might even post profits in the middle of next year, a time when Aurora will probably still be struggling.

Aphria's (NASDAQ:APHA) quarterly revenue growth of 14.7% year over year is decent, but it won't turn any heads. On the other hand, it has many favorable traits that other cannabis companies lack, including having more than a full year of consecutive and positive earnings, not to mention holding the No. 3 spot in the Canadian market by revenue and the No. 1 spot in the Canadian market for vaporizers.

Aphria also has a significantly more diverse revenue base than its peers. This was bolstered by its recent acquisition of SweetWater Brewing Company, an American cannabis-infused craft beer company, for $250 million in cash and $50 million in stock. The SweetWater purchase will help it to prepare for its next big initiative: Capitalizing on potential federal marijuana legalization in the U.S.

GrowGeneration (NASDAQ:GRWG) is the only profitable company on this list, and it's also the one with the fastest-growing quarterly earnings, which expanded 217.9% year over year. Plus, it's nearly debt-free compared to its cash on hand and trailing revenue. So, how does this company buck all of the marijuana industry trends? 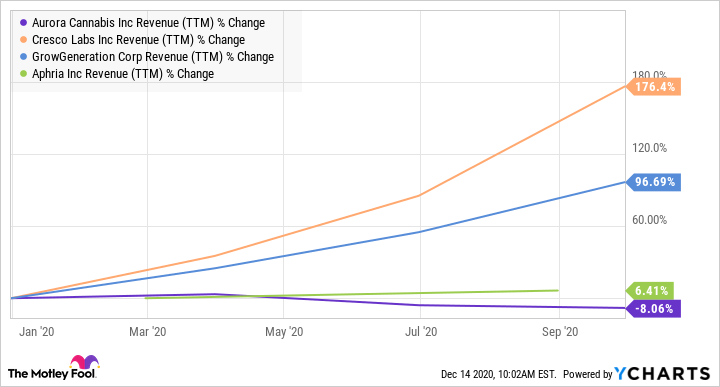 Well, mostly by selling hydroponic garden supplies like tools and plant nutrients rather than cannabis products. While it does sell a few items specifically for the cultivation of marijuana, the company sells gardening that could be used to grow a wide variety of plants. In fact, with 28 locations in 10 states, it's the largest such chain of hydroponic garden centers in the U.S., and it sells to both commercial and individual customers.

As legalization and decriminalization efforts advance in the U.S. and the cannabis industry continues to expand on a state-by-state basis, you can bet that GrowGeneration's products are going to be in hot demand. In anticipation of this, the company has already positioned stores in states where it expects the cannabis market to grow the most. To assist in this process, management has also sourced quality products that it can white-label to sell directly to cannabis cultivators. All of these attributes and efforts point to favorable outcomes for shareholders, especially in comparison to companies like Aurora.