We cannot name the winners of the marijuana retail market yet. We know it's going to be huge. But most of us have no idea which companies will rise to the top. We don't even know when pot will be fully legalized in the U.S. That alone keeps a lot of potential investors on the sidelines.

One way to play this uncertainty is a "picks-and-shovels" strategy. You don't bet on the people who are making the mad rush to find the gold. Instead, you invest in the people who are selling the picks and shovels to all the miners. That's why my family owns shares of Innovative Industrial Properties (NYSE:IIPR). That company provides financing to pot entrepreneurs. But perhaps an even stronger picks-and-shovels candidate is GrowGeneration (NASDAQ:GRWG). This fast-growing retailer owns and operates a chain of hydroponic and organic gardening stores focused on the marijuana industry. Its motto? "Where the Pros Go To Grow." 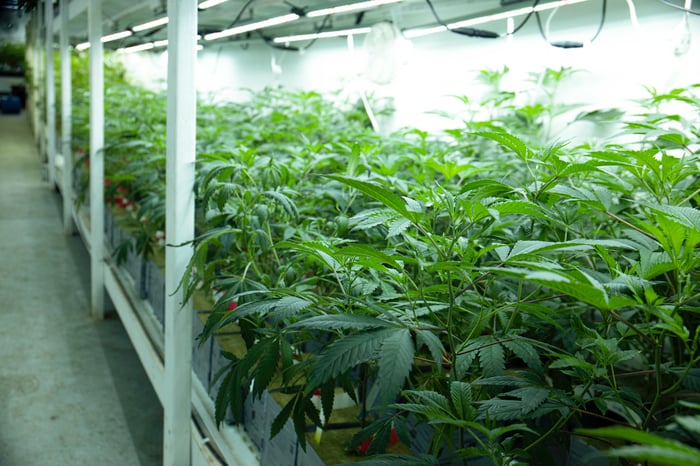 This is similar to an investment in Scotts Miracle-Gro (NYSE:SMG), with a couple of important differences. Scotts manufactures and supplies lawn care products, and has expanded into the hydroponics supply space for marijuana growers with its Hawthorne Gardening subsidiary. Scotts is not a retailer, however. So the two companies are not direct competitors.

The other major difference is how huge Scotts is compared to GrowGeneration. Scotts had $4 billion in sales over the last 12 months; GrowGeneration had just $156 million in revenue. So while GrowGeneration is the largest company in its space, it's actually a tiny retailer in the grand scheme of things. How big can it get? Let's dig in.

It's the top dog in marijuana farming retail

GrowGeneration owns and operates 31 hydroponics garden centers across the U.S., making it the largest of its kind. And the company just acquired the No. 3 chain, The GrowBiz, adding six more stores to its roster. Hydroponics is a method of growing plants without the use of soil. Instead, the plant is grown in a nutrient-water solution. Many indoor growers prefer this method as it can maximize yields, save space, and speed up growth.

GrowGeneration sells hydroponic equipment, soils, nutrients, and lighting fixtures in states where pot is legal. The company has been making out like a bandit in 2020 -- its stock has octupled in under a year. Contrast this performance with what major pot stocks like Canopy Growth, Aurora Cannabis, and Aphria have done. 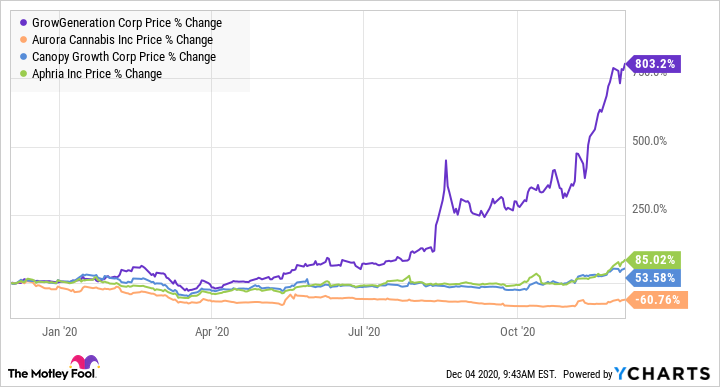 So what's going on?

GrowGeneration has had triple-digit year-over-year revenue growth in every quarter this year. Sales jumped 152% in the most recent period. That's just one reason this retailer's stock has zoomed higher this year. The fact that this fantastic growth is happening in an awful year for most retailers is another bonus.

What's really striking is that GrowGeneration is now profitable. That's perhaps the main distinction between this company and other pot stocks right now. Most marijuana companies are deep in the red, so to find a profitable and fast-growing stock in this sector makes a lot of investors bullish.

Let's compare GrowGeneration to some other pot retailers in the U.S., names like Green Thumb (OTC:GTBIF) and Planet 13 (OTC:PLNH.F).

GrowGeneration started off the year at a micro-cap valuation of $150 million, and now sits at $1.77 billion. That's one big reason the stock has jumped so high, so fast -- it started off a tiny base.

The main red flag for me is that GrowGeneration screams "niche business."

Marijuana is a huge market. Including illegal sales, it might be a $50 billion industry right now. But investors should not confuse the vast consumer market for marijuana with the tiny number of people who seek to become marijuana farmers. GrowGeneration is focused on the latter, so its ultimate market opportunity is not as large.

While this is certainly a more attractive stock than some of the marijuana companies deep in the red, the best small-cap companies to buy are the ones that are chasing major market opportunities. Those are the stocks that might grow to become large caps or even mega-caps. As a niche retailer, GrowGeneration will always be a small company. So while I applaud its rapid growth from a micro-cap to a small-cap, I have serious doubts that this growth can continue.