Only five years ago, investors were bidding up shares of CVS Health (NYSE:CVS) as the company took over Target's (NYSE:TGT) pharmacy business and acquired a business that provided pharmacy services for long-term care facilities. The stock now sits 36% below those 2015 highs, and disappointed shareholders are wondering where the company might be five years from now. 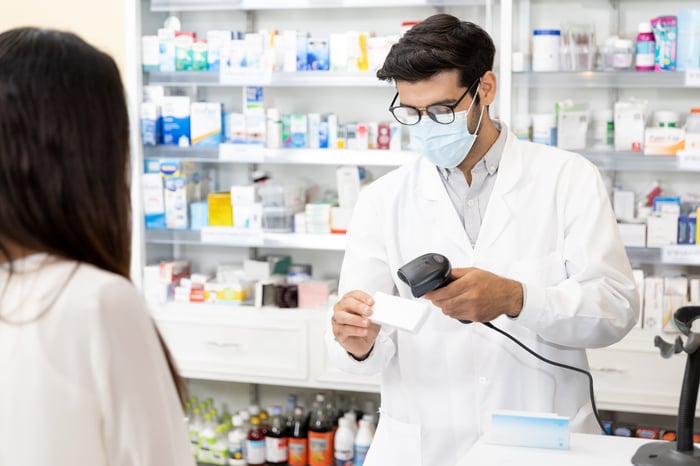 In 2014, the company changed its name from CVS Caremark -- which reflected its 2007 acquisition of pharmacy benefits manager Caremark -- to CVS Health. The change was more than symbolic. It also decided to stop selling tobacco products in its stores because doing so conflicted with its expanding mission, grew the number of MinuteClinics to 1,100 nationwide, and acquired health insurer Aetna.

The in-store clinics offer customers preventative healthcare -- like administering vaccines or monitoring diabetes -- and appointment-free non-urgent care at low costs. The purchase of Aetna meant CVS could provide some care directly to those it insured, screening and caring for people before sending them to more expensive care from a doctor to save costs.

As had been anticipated for years, Amazon (NASDAQ:AMZN) announced its official entry into the pharmacy business in November. The e-commerce giant now allows customers to order prescriptions online, with free two-day shipping for Prime members. Unless CVS can find a way to differentiate itself, its stock price may continue to decline.

That task will fall on Karen Lynch, who will take over as CEO in February. She joined the company in 2012, and previously led Aetna's integration of insurer Coventry Health and its specialty products division.

CVS has undergone some big changes in the past five years, but what investors need to know is not where it has been, but where it's heading. Although technology-first companies will continue their assault on its nearly 10,000-store brick-and-mortar footprint, the strategic moves CVS has made could help bolster its defense.

The combination of Caremark, Aetna, and MinuteClinics gives CVS near end-to-end control of several potential cost drivers. Having a large insured customer population gives the company negotiating power on drug prices, and the ability to offer some in-house care to maintain efficiency and cost controls. Further, it is getting in front of another direct-to-consumer trend, partnering with Teladoc (NYSE:TDOC) to offer virtual care from its MinuteClinics.

Half a decade away

In many ways, the bureaucracy of the healthcare industry may work to the company's advantage as well. While Amazon's pharmacy offering sounds disruptive, it will still require doctors to designate it, and patients to request it, when writing prescriptions. At some practices, switching prescriptions from one pharmacy to another has to be done during an office visit -- and many patients are avoiding those for now. Also, while there are customers who will no doubt make the switch and not care about the loss of the personal interaction, the act of picking up a prescription is a deeply ingrained habit for many, and some patients frequently make use of the opportunity to ask questions of their pharmacists.

In five years, I foresee CVS being in a similar position to the one it's in now. It has positioned itself to defend against a shift in the healthcare business that's likely to take a generation to play out. As the traditional model evolves, and companies like Amazon chip away at margins, CVS is likely to continue making deals to squeeze as much profit as it can out of its insured members. What the new CEO decides to do with capital -- dividends, debt, share buybacks, or more acquisitions -- will determine where the share price sits five years from now. Although the stock is cheap based on traditional valuation metrics like price-to-earnings (P/E) ratio, I believe that's because a difficult future for the company is all but assured. The shares may offer some margin of safety and a decent 2.8% dividend, but investors need to have faith that CVS can defend itself in an industry that's moving away from its legacy business model.

Where Will CVS Health Be in 5 Years? @themotleyfool #stocks $CVS $AMZN $TGT $TDOC Next Article
Current