Shareholders of Pfizer (NYSE:PFE) have had an eventful year. A long-awaited spinoff and a global pandemic populated most of the headlines about the company, but those weren't the only developments that will affect the stock in 2021 and beyond.

As we approach the holidays, it's useful to look back and ask how much you would have if you had invested in Pfizer at the beginning of the year. More importantly, does next year look better or worse? 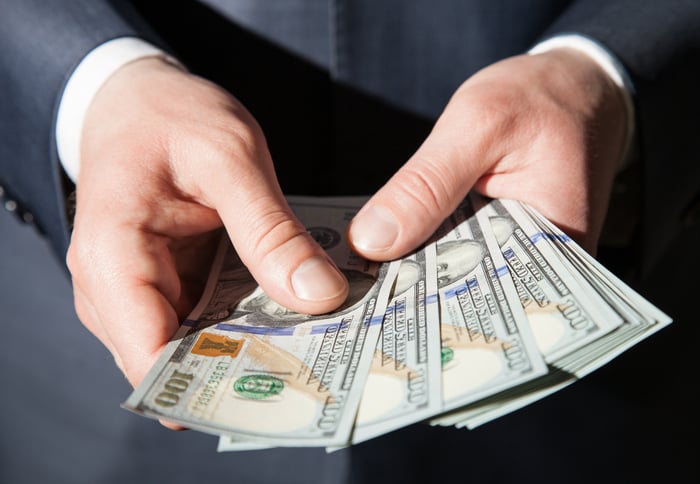 Stock prices can fluctuate wildly from day to day or even month to month. That's why it's important to evaluate the performance over a longer time horizon. In a year in which the company merged its off-patent drugs into another company and helped develop a vaccine to fight a global pandemic, the stock sits a mere 2.4% above where it began the year.

It was an interesting ride between then and now. If you had invested $5,000 to begin 2020, that investment would now be worth about $5,122. Add in dividends and you'd have about $5,325. That 6.5% return is well below the average market return in a year: 10%. At the lows in March, as the coronavirus was forcing shutdowns and traders were bailing on stocks, you would have only seen about $3,600 in your account. It's a good lesson on buying and holding, especially when an underlying business isn't changing. 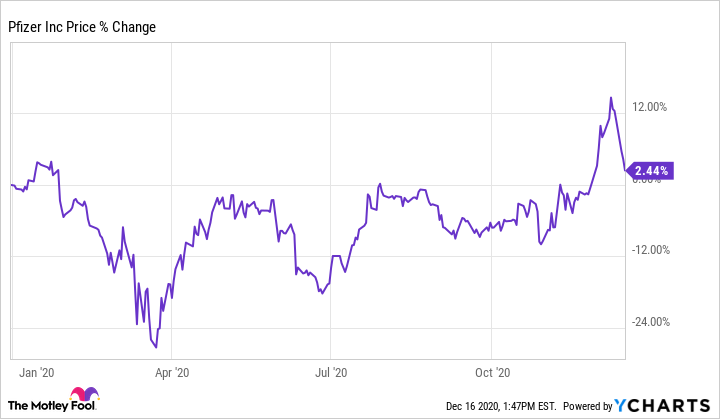 Last year, the company said it would spin off its Upjohn business unit. Upjohn housed the company's off-patent drugs, and separating it would leave Pfizer with the more profitable cancer drugs and vaccines.

Management wasn't just going to abandon it, though. Instead, Upjohn would be combined with Mylan -- a generic drug maker -- and form a new company called Viatris (NASDAQ:VTRS). The deal was finalized in November, leaving Pfizer stockholders as 57% owners in the newly formed company.

Of course, most of the headlines this year about the company have focused on its partnership with BioNTech (NASDAQ:BNTX) and the development of a vaccine against COVID-19. The company decided against U.S. government funding -- and the potential strings involved -- and set out to develop the drug and arrange logistics more or less on its own.

The gamble appears to have paid off. With approvals in the U.K. and Canada, and Emergency Use Authorization earned in the U.S., it's the first vaccine to be administered to Americans outside of clinical trials.

Lost in the noise

There is no doubt the vaccine is an accomplishment everyone should cheer for, and Viatris is a capital allocation move that should benefit shareholders moving forward, but those weren't the only big announcements for the company in 2020. There were a few stories that got lost in the noise.

Perhaps the most meaningful development was the the failure of Ibrance, the company's breast cancer drug, in two clinical trials designed to show its effectiveness in early stages of the disease. Although the studies failed, sales are still growing in treating advanced and metastatic breast cancer. Despite being years away from a phase 3 trial, management has reported multiple preclinical candidates that show promise in treating breast cancer -- some with more potency than Ibrance and others used in conjunction with the drug.

Other, lesser publicized developments were also important to the long-term future of the company. Pfizer's treatments for rare diseases continued to show promise. The company's partnership with OPKO Health (NASDAQ:OPK) in treating a growth hormone deficiency produced positive phase 3 results. Additionally, the company's gene therapy for hemophilia, being developed with partner Sangamo (NASDAQ:SGMO), entered phase 3 trials and was administered to the first participant in October. A treatment for Duchenne muscular dystrophy, another rare genetic disease, is also set to begin Phase 3 trials by the end of the year.

Pfizer's 2020 will always be about the COVID-19 vaccine, and to some extent the creation of Viatris. For investors seeking a stable dividend company in the pharmaceutical space, shares of Pfizer are a low-risk way to gain exposure to equities and capture a 4% dividend. The company has a clearly articulated strategy that it is executing, and a robust pipeline in oncology, gene therapies, and immunology that should generate additional revenue over the next several years.