In the wake of a successful COVID-19 vaccine, many out-of-home and travel-related stocks have boomed. Investors now feel confident in consumers returning to out-of-home activities next year and beyond. Many of these stocks were trading at depressed levels prior to the announcement, so they could still make good buys today.

American Express (NYSE:AXP) has recovered, but hasn't reached historic highs. Yet looking across the financial and travel-related stock universe, Amex still looks like one of the more compelling risk-rewards today, even after its rise over the past two months.

Here are three reasons I plan to add to my American Express stake in the near future. 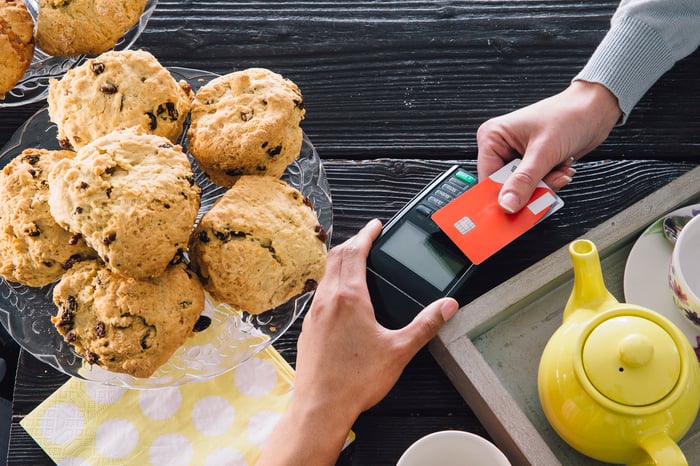 Amex is not only a credit card issuer and lender, but also a card network leveraged to spending volumes. Traditionally, its card benefits are skewed more heavily toward travel-related rewards than other issuers, given Amex's emphasis on well-off prime customers. Last year, around 30% of Amex's proprietary billed business was related to travel and entertainment spend, which has been decimated this year. Among financials, Amex stands to benefit the most from increased travel activity.

Still, I think the market may be underestimating a mere "return" of travel. In fact, I'd say there is a decent chance of an unprecedented travel boom late next year and 2022. The average U.S. consumer's balance sheet is in much better shape than it was in the last financial crisis. In fact, U.S. credit scores have gone up to record highs this year, in spite of an unprecedented recession. That's because many have saved up and paid down debt, as they weren't allowed to spend on restaurants or travel this year.

The Spanish flu of 1918 eventually gave way to the Roaring '20s. It's quite possible we could see a spending surge once the economy fully reopens, especially if interest rates stay low.

American Express' management actually anticipated this. Instead of pulling back on expenses during the pandemic, it actually increased marketing spend by 23% last quarter. That counterintuitive move has increased card acquisitions from over 1 million in the second quarter to 1.4 million in the third quarter. That's 1.2 million new cards just in the first two months of the fourth quarter, according to CEO Steve Squeri.

All of those new card acquisitions should "pay off" (pun intended) when spending returns with a vengeance next year.

Of course, all financial companies need to be aware of credit risk, especially in a recession. Yet American Express is one of the least risky lenders in that respect. Only about a quarter of its revenues are tied to net interest income on loans, with the remainder coming from swipe fees, card fees, and other nonlending revenue.

Yet even American Express' outstanding loans appear to be in a sweet nifr good standing. In fact, the company's delinquency and charge-off rates are among the lowest the company has ever seen, according to Squeri. The most recent data has even shown delinquencies and charge-offs declining over the past couple months from already-low levels.

Finally, the company's balance sheet is also excellent. The pause in new loans earlier this year has increased cash on the books. Amex's CET1 ratio reached 13.9% last quarter -- far above the minimums mandated by the Federal Reserve.

Prime customers, a less-risky business model, low credit losses, and a fortress balance sheet make American Express relatively low-risk, in case there's a setback in the economy. It's also why Warren Buffett's Berkshire Hathaway (NYSE:BRK.A) (NYSE:BRK.B) hasn't sold any shares of American Express this year, despite trimming or selling out of many other bank positions.

Finally, while American Express is a 170-year-old company, that doesn't mean it doesn't have good growth prospects either. One key here is international expansion, an area that contributed mightily to growth in 2019, and should continue to bolster growth in the years ahead. Traditionally, American Express has been underpenetrated in international markets versus its rivals, so it has much more white space ahead of it.

Over the long-term, that access to the world's second-largest economy -- which one day could become the world's largest -- could pay off handsomely for Amex over the course of the 2020s.

Tremendous value for a rock-solid stock

Despite the relatively low risk and tantalizing growth prospects, American Express' stock is still about 14% below its pre-pandemic high, and trades only for about 14.9 times its 2019 earnings levels.

While that valuation is a tad higher than many banks, it's also well below the other pure-play card networks, despite American Express essentially being 75% card network, 25% lender. As such, American Express still looks like a terrific risk-reward today even after its November surge. I'll be looking to add to my existing stake to play the 2021 economic recovery.