An acquisition strengthened the company's focus on data science.

Six months after its IPO, Vroom ( VRM 6.80% ) has mostly been a disappointment to investors.

Shares of the online used car dealer surged on IPO day, but the stock has faded since then, down about 20% from its closing price on opening day. The stock sold off following its first two earnings reports as a public company, and Wall Street was also turned off by a secondary offering of nearly 11 million shares in September.

However, Vroom is still growing fast in a huge market. The total value of all used car sales in the U.S. was $841 billion in 2019, making it the largest retail category in the country, and Vroom estimates that the online used car market could be as big as $400 billion in a decade. The success of Carvana, the largest player in used vehicle e-commerce, shows the sector is ripe for growth. 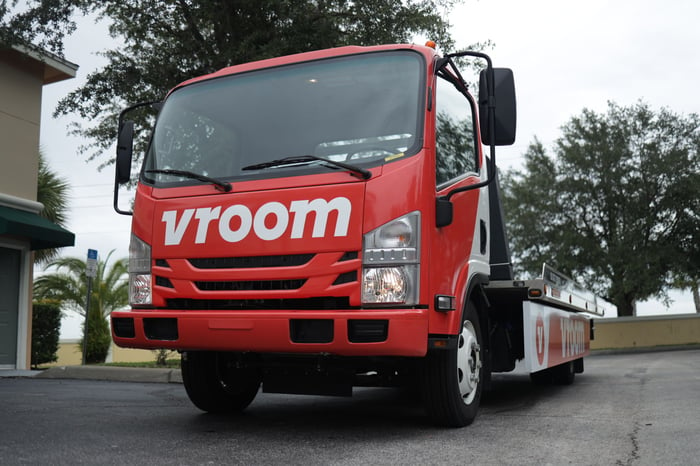 Doubling down on tech

Vroom uses data science and artificial intelligence to improve its marketing, supply chain, logistics, and vehicle pricing. The company sees that as both a core focus of its business and an advantage against local dealerships, which may not have the same sophisticated models.

Now the company is taking a significant step to enhance its technological prowess, acquiring Carstory for $120 million.

Carstory, which specializes in matching used car seekers with the perfect used cars for them, brings Vroom the industry's largest source of AI-powered analytics and market data. It uses a machine learning platform to examine more than 7 million used car listings per day and more than 18 million consumer listings per month to provide the industry's best predictive market data. Carstory's services will still be available to other dealers, automotive financial services, and other industry operators, but Vroom will now be the owner. That relationship will also help accelerate Vroom's own mission to help people find the right used cars for them.

Vroom CEO Paul Hennessy said, "We've been continually impressed by the size, breadth and sophistication of CarStory's operations as we have worked with them for the past two years and we are thrilled to welcome them to Vroom."

Vroom spent years putting together its e-commerce platform before hitting the gas early in 2019. Since then, the e-commerce business has soared, with sales growing by triple digits over much of that time. The COVID-19 pandemic has brought some challenges for online car dealers like Vroom, as inventory has been in short supply in a hot car market; however, core vehicle growth remains solid, and e-commerce units sold rose 59%.

The company sold more lower-priced vehicles than usual, which impacted e-commerce revenue growth, which was up 23% in the quarter. E-commerce gross profit, however, more than doubled in the period, up 120% as the company benefited from improvements in inbound logistics and reconditioning costs. Gross profit per unit -- a key metric for the company, as it is the most important driver of its profit -- jumped 39% to $2,188. Investors should keep their eye on at that figure, as it will be the best measure of the company's ability to execute and improve profitability.

As the company grows and its technology improves, it should continue to see costs naturally come down and profits expand, much like it reported in the third quarter -- but the Carstory acquisition should accelerate that shift by giving it information to improve its cost savings and profitability.

With a $400 billion market in front of it, the opportunity for this IPO stock is compelling. And with a market cap of just $5 billion, Vroom stock has plenty of upside potential. It's up to management to execute on that potential. The Carstory deal is expected to close in January.

Vroom Stalls Out After Its Debut Earnings Report. Is More Trouble Ahead?

Vroom Soars on Its IPO. Here Are 5 Things You Need to Know About the Used Car Disruptor