One day after making the most earth-shaking announcement in its history, Canadian marijuana company Aphria (NASDAQ:APHA) saw its stock close 5.5% lower on Thursday. That was quite the comedown from the high of its news on Wednesday that it is effectively acquiring a rival, Tilray (NASDAQ:TLRY), to create the world's largest cannabis business. A prominent analyst has cooled on Aphria following that announcement.

Stifel Financial prognosticator Andrew Carter cut his recommendation on Aprhia shares on Thursday; he now rates them a hold, from the previous buy. While doing so, however, he raised his price target on the stock to 9.90 Canadian dollars ($7.77); it was formerly CA$8.25 ($6.48). 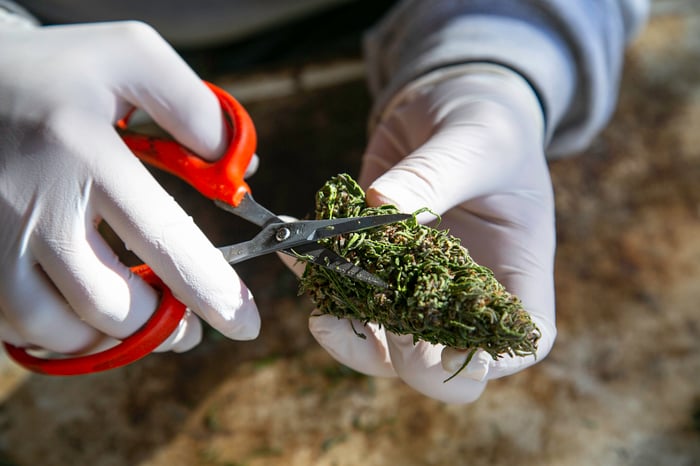 In his note to investors, the analyst wrote that "Aphria has successfully achieved a leadership position in the Canadian adult-use market organically, and we question the opportunity cost of capital/management bandwidth for undertaking this acquisition."

"We believe the shares are likely to remain in a holding pattern over the near-term as investors gain confidence with the combined platform's long-term potential," he added.

This in itself shouldn't dissuade marijuana stock investors; they are a hardy bunch used to negative press/analysis.

More to the point, they generally accept the fact that the cannabis business is a long-term play given its many challenges (regulatory bottlenecks, black market competition, legal status of weed, etc.). Tilray 2.0, with today's Aphria leading the way, will be a well-diversified company (hopefully) able to take advantage of economies of scale.