The best stocks aren't always exciting. In fact, great investments can be quite boring.

There are three companies on my Christmas wish list that have well-recognized brands in their industries, proven business models, and no debt. You could say Align Technology (NASDAQ:ALGN), Trex (NYSE:TREX), and The New York Times (NYSE:NYT) are also boring because the businesses have been such steady performers.

It's actually because these three surefire stocks are boring that investors should hope Santa brings just a little market volatility their way and creates an opportunity to buy shares this holiday season. Let's find out a bit more about them. 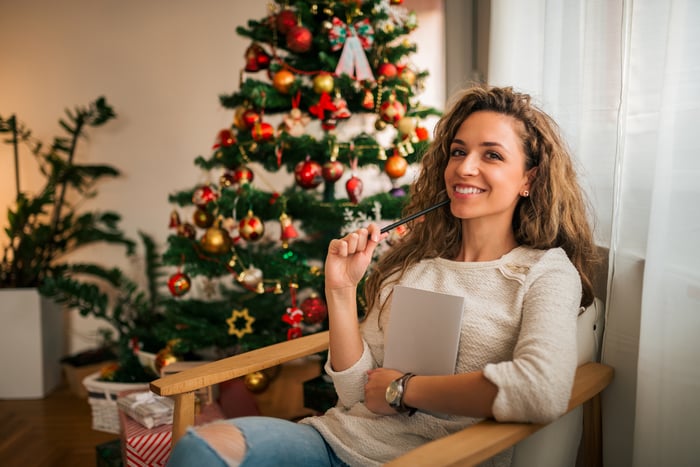 Despite metal braces being the choice for most of the 15 million people annually who elect to straighten their teeth, Align estimates 75% of them could benefit from Invisalign, the company's clear plastic alternative orthodonture. More and more people have been benefiting every year from making this alternative choice -- and so have shareholders. The stock is up 2,800% since the beginning of 2010 versus a 228% jump for the S&P 500 index over the same period. That is on the back of 22.5% annual sales growth between 2010 and 2019. Align's marketing focuses on the use cases of kids, teens, and adults, but it's the doctors who are the key to success.

The company has used the acquisition of intra-oral scanning company iTero in 2011, and software maker exocad in 2020, to facilitate the scanning, mapping, design, and fabrication of solutions for patients seeking straighter teeth. To help doctors overcome any hesitation with new technology, the company has developed courses and materials that led to 96,000 Invisalign-trained doctors worldwide. This isn't just good for patients and the company; Invisalign's faster course of treatment means each doctor can see more patients and earn more money. As they get more comfortable with the process, the doctors can also handle more Invisalign patients. The average cases of aligners per doctor -- a good proxy for patients -- has increased from 36.6 in 2016 to 65.0 last year. That remarkable increase in productivity is a great incentive for doctors to recommend Invisalign to their patients. With the market for clear aligners worth $2.3 billion and estimated to grow almost 19% over the next seven years, it's hard to see what could trip up this outstanding business.

Trex isn't a household name, but if you live in one of the many households adding outdoor living space, you've likely come across the company's decking made from recycled material. Although Trex is one of the leading companies in the space, all composite decking companies together only make up 20% of the overall decking market. With the market for composite decking growing at an estimated 12.6% annually, management recognizes the huge opportunity and is investing accordingly. Wall Street sees the opportunity as well. The stock is up 2,500% since 2011.

The company is adding capacity, and recently announced new production lines in Nevada and additional lines in Virginia that will be ramping up through the first two quarters of 2021. The added production can't come too soon. After posting 9% year-over-year growth in 2019, management estimates the coming fourth-quarter sales will be up 30% from 2019. Through operational excellence, management continues dropping more of those sales to the bottom line. Operating margin has improved every year for the last nine years, from 0.8% in 2011 to 27.1% over the past 12 months. If current trends continue, the expansion won't be the last for the company to meet growing demand.

In the last few years, a tense political climate has helped boost sales of the so-called "newspaper of record." In a difficult climate for newspapers, the company has been one of the few that successfully shifted much of its business from print to digital. The Times has embraced a new era of digital content with a portfolio of podcasts and a la carte subscriptions for its renowned cooking reports and its crosswords. It has also spotlighted its award-winning investigative journalism. The moves have paid off for the 170-year-old company.

For the quarter ending Sept. 30, the newspaper reported 6.9 million subscribers. That compares to 2.3 million at the end of 2015. Digital-only subscriptions have driven the growth, jumping from 1.3 million to 6.1 million over that same time period. This most recent quarter was the second consecutive where digital subscription revenue outpaced print.

The transformation is translating to the bottom line. While revenue for the company has increased by 13% to $1.8 billion in the same 2015-to-2020 period, earnings per share have grown 147%. Short-term influences may drive subscriptions year to year, but The New York Times company is creating a model to produce profitable growth for the next 170 years.