The stock market moved sharply lower on Monday morning, as market participants reacted negatively to news from around the world of a new mutation of the coronavirus that has prompted another round of lockdowns and travel restrictions in Europe. Progress in Washington on a potential stimulus package for Americans seems to be going forward, though, and by 11:30 a.m. EST, major market benchmarks were well off their lows of the day. The Dow Jones Industrial Average (DJINDICES:^DJI) was down 163 points to 30,016, while the S&P 500 (SNPINDEX:^GSPC) fell 44 points to 3,665 and the Nasdaq Composite (NASDAQINDEX:^IXIC) lost 121 points to 12,634.

Even in the market slump, there was a group of stocks that did extremely well. The banking sector got an important piece of news that helped send shares of Goldman Sachs (NYSE:GS), JPMorgan Chase (NYSE:JPM), and other big banks sharply higher. Moreover, the impact could last a lot longer than a single day. 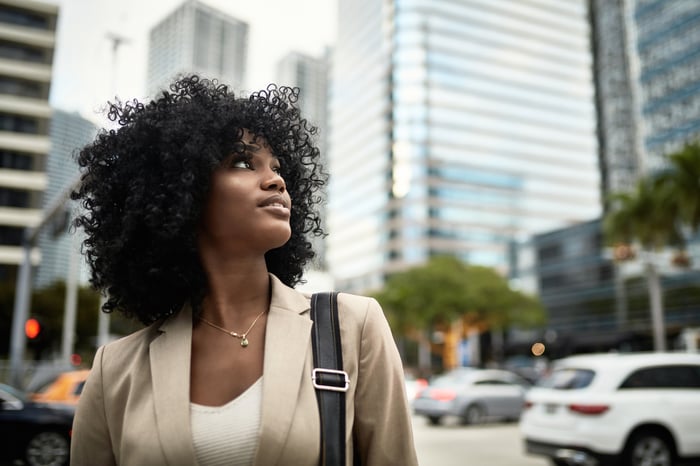 Nearly the entire bank stock arena had solid gains on Monday morning. Goldman led the way higher with a 6% rise, followed by Morgan Stanley's (NYSE:MS) rise of nearly 5%. Among more retail-oriented players, JPMorgan rose nearly 4%, while Citigroup (NYSE:C) was higher by 3% and Bank of America (NYSE:BAC) settled for a 2% rise.

The good news came late Friday from the Federal Reserve. The U.S. central bank announced that it would allow big banks to start making repurchases of their own stock, starting in the first quarter of 2021.

The Fed move reverses restrictions that policymakers had put in place back in June. With the annual round of bank stress testing indicating significant potential weaknesses in the immediate aftermath of the COVID-19 pandemic, the Fed took the unprecedented move to place limitations on the rights of banks with at least $100 billion in assets to make stock buybacks at will. The Fed then extended that restriction in September, taking it through the end of the year.

That was a big hit on bank investors. Historically, banks have preferred to return more of their capital to shareholders through stock buybacks than by dividends, because investors prefer more stable dividend payments while banks like the flexibility of being able to make capital allocation decisions on a more opportunistic basis. The disappearance of buybacks removed a key underpinning for bank stock prices, and the entire sector has underperformed the market in 2020 as a result.

What to expect from bank stocks going forward

Conspicuously absent from big gainers was Wells Fargo (NYSE:WFC), which was up just over half a percent. Wells has been under special limitations of its own, with the Fed putting a cap on the bank's assets in response to numerous scandals involving its treatment of customers. Those asset caps don't appear to be going anywhere in the near future.

Banks still face the challenges of a flat yield curve and low interest rates, which are hampering their ability to generate net interest income. Nevertheless, investors have looked for a catalyst for a turnaround in the banking sector, and the Fed's latest move could give them exactly what they want.