Exelixis (NASDAQ:EXEL), founded in 1994, is a commercial stage biotech company with U.S. Food and Drug Administration (FDA)-approved drugs to treat advanced cases of thyroid, kidney, and liver cancer. Its lead drug goes by the medical name of cabozantinib, but uses the marketing brand names of Cabometyx and Cometriq. Exelixis's immediate focus is in expanding the uses of these medications to treat the earlier stages of its targeted cancers. But the biotech might also be thinking about getting scooped up in a potential acquisition deal one day. Should you buy shares of Exelixis before that happens? 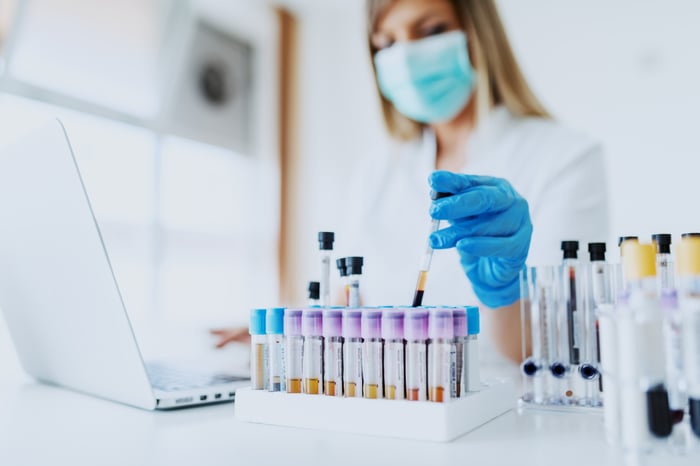 What is the state of Exelixis's business?

The company's goals for expanding indications are largely being pursued in partnership with rival drug companies, with the objective of creating combination therapies between cabozantinib and other cancer drugs. The best and most successful such partnership to date has been with Bristol Myers Squibb (NYSE:BMY) and its lung cancer drug, Opdivo. In October, Exelixis announced that the FDA had granted priority review of this promising new combination treatment option, after earlier positive results from a phase 3 trial for advanced cases of kidney cancer. The FDA's decision on approval is estimated to arrive on or around Feb. 20, 2021. A thumbs-up from the FDA could be a significant boost to revenue growth (and perhaps a positive catalyst for Exelixis's stock price). Trial results showed the drug was far superior to currently marketed competitors in terms of improved survival rates and tolerability.

However, Exelixis is not limiting its development efforts to this singular indication. It has numerous ongoing clinical trials in different stages of review with the goal of broadening the applicability of cabozantinib to other forms of cancer, both as a stand-alone drug and in combination therapies. Just this week, Exelixis reported that cabozantinib had reduced the risk of disease progression or death from a late-stage thyroid cancer by 78%. Several other phase 3 studies are expected to be completed in mid- to late 2021, which will hopefully be additional positive developments in the fight against other types of cancer.

While Exelixis waits for FDA reviews and studies to play out, the company is in excellent financial condition. Per its most recent third-quarter earnings release, Exelixis guided to total annual revenues of $925 million at the midpoint for 2020, with earnings per share around $0.45 based on nine months of actual results. It has a pristine balance sheet with over $1.5 billion in cash and liquidity and zero debt. While not cheap in the classic valuation sense of low price-to-earnings (P/E) ratios, its stock price (currently around $20 per share) hovers around the midpoint of its 52-week range between $14 to $28, and has been mostly unchanged over the course of this year. This likely reflects its modest revenue growth rate, and that investors are waiting to see how trials and approvals progress in 2021.

Could Exelixis be scooped up soon?

Having an established revenue stream and positive net earnings sets Exelixis apart from many early and late stage biotech companies that are far more speculative in nature. It also potentially makes the company an attractive target for larger pharmaceutical companies, many of which have been on a merger and acquisition frenzy over the past year. That dealmaking has focused on acquiring unique and differentiated product lines, especially in the cancer and rare disease-related spaces. In one case (as noted below) the smaller biotech firms don't even have an approved drug on the market as of yet and report negligible revenues, which truly represents a risky acquisition bet. The most recent and largest deals of 2020 are as follows:

That is just a small sampling of recent deals. Other large pharma companies that have been active in the acquisition game include Novartis (NYSE:NVS), Eli Lilly (NYSE:LLY), and Merck (NYSE:MRK), all of which have been targeting niche biotech firms to broaden their product portfolios. Even at a $6 billion market cap, I don't think that top players will shy away from the potential price tag of Exelixis's laser-focused product lineup.

Exelixis is just fine on its own, for now

Exelixis should be a beneficiary of both this ongoing industry consolidation, and its extensive internal product development effort, which allows investors to enjoy current growth and profitability until a possible merger or acquisition plays out. For now, Exelixis is showing all signs that it will remain focused on achieving the development of safe and efficacious drug therapies and therapy combinations, and advancing those drugs to market. It is for these reasons that I believe Exelixis is an attractive investment as we head into 2021.