Shares of solid-state battery technology company QuantumScape (NYSE:QS) were 28% higher than Monday's close, as of 12:15 p.m. EST. That brings the two-day combined gain for the stock to about 60%.

Investors have been excited about the company's battery technology since QuantumScape merged with a special purpose acquisition company (SPAC) in late November. Shares have rocketed over 400%, and have more than doubled just since the company released performance data on its technology on Dec. 8.

But rumors of Apple (NASDAQ:AAPL) producing its own electric vehicle (EV) may be driving the most recent gains. 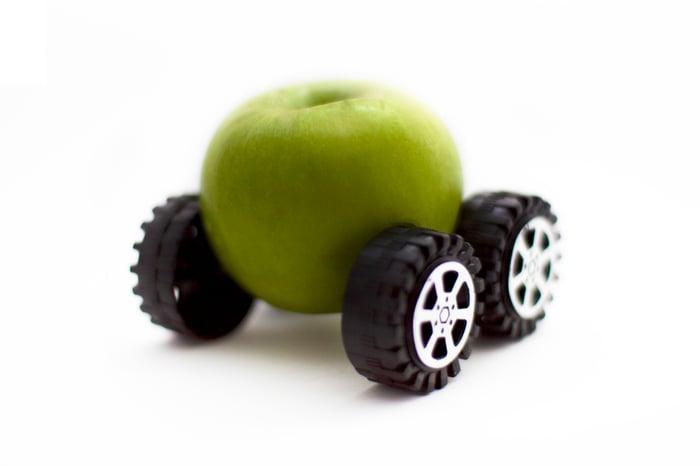 Apple is planning to produce a self-driving passenger vehicle by 2024, according to a Reuters report. The company may also be planning to use "its own breakthrough battery technology," according to the report.

That would seem to indicate that QuantumScape could be facing a very formidable competitor in the near future. So why would shares go up?

One reason could be that Apple has a mountain of cash, and one could speculate that it would acquire a company with the right technology. QuantumScape highlighted its technology in a presentation earlier this month. The solid-state technology charges to 80% capacity in just 15 minutes, has greater than a 300 mile range, has a long usage life, and is non-combustible.

The company is notably backed by both Volkswagen (OTC:VWAGY) and Bill Gates. Whether investors are speculating about an Apple investment is anyone's guess. Today's move could also be driven by thinking that other potential customers will want to partner with QuantumScape if they have to compete against an Apple EV.

QuantumScape is still several years from commercial production. With a current market capitalization of about $44 billion, an expectation of success is built into the stock at this point. Investors should consider any investment part of a speculative portion of a portfolio, and size it accordingly.