Please ensure Javascript is enabled for purposes of website accessibility
Free Article Join Over 1 Million Premium Members And Get More In-Depth Stock Guidance and Research
By Alexander Carchidi - Dec 23, 2020 at 6:45AM

Tilray's upcoming merger with Aphria makes this decision an easy one.

If you had to choose between a small company that's growing slowly and can't control its operating costs, or a company that's about to become the largest in its industry, which would you pick? I would bet you'll go with the latter.

That's exactly why there isn't much of a contest between the rising star of the cannabis industry, Aphria ( APHA ), and the struggling OrganiGram ( OGI -6.86% ). While there could be plenty of reasons why you may want to think twice before investing in either company, the one thing you shouldn't be on the fence about is which of the two has what it takes to grow. 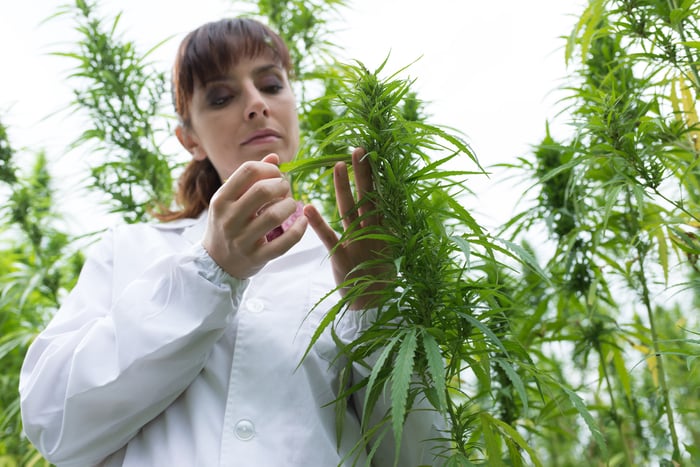 In the grand scheme of things, OrganiGram hasn't paid off for its shareholders. If you bought it in January of 2018 and held it until now, you'd be down by around 50%.

Part of the reason for this is that it hasn't been consistently profitable. OrganiGram hasn't been in the black for a single quarter in more than a year, and its net losses have ballooned since 2019. In fact, in the last several quarters, the company's cost of sales has been increasing faster than its revenue has been growing. Likewise, its inventory has frequently sat unsold in increasing amounts, leading to lost revenue.

Nonetheless, the company is trying to reverse its fortunes, and has launched 40 new products over the 2020 fiscal year. Its new offerings include edibles, dissolvable cannabis beverage powders, and additional strains of unprocessed cannabis flower. But it won't introduce any new high-value products like vaporizer cartridges until the second quarter of its 2021 fiscal year.

Several of the products from its Edison brand won awards for being the best on the Canadian recreational market. Two of the four awards were for low-value added products, like cannabis flower and pre-rolled joints. So the value of being in the leading position may not necessarily translate into higher revenue, even if it does strengthen the brand.

The good news is that OrganiGram's net revenue increased by 25% in the most recent quarter compared to the same quarter last year. And, its selling, general, and administrative (SG&A) expenses fell by 22% in the same period. This improvement came at a steep cost, however. Cutting its workforce to shrink expenses "resulted in some meaningful missed revenue opportunities," per the latest earnings report. That's an admission that should make even bullish investors balk.

Aphria's merger with Tilray could be a winning move

Like OrganiGram, Aphria's stock hasn't performed very well for the last three years, but it has done slightly better. In contrast, its quarterly revenue is growing slightly slower than OrganiGram's, with a year-over-year increase of 14.7%. This may soon change, however.

Aphria announced this week that it was planning to merge with Tilray in a deal that will make it the single largest company in the cannabis industry. The merger is expected to deliver significant cost savings and pave the way for the new entity to compete in the freshly expanded U.S. adult-use market. If the deal goes through, the company will have roughly ten times the revenue of OrganiGram. It'll also have at least twice as many brands, with a plethora of products in every major segment, and at a handful of different price points.

Plus, it'll be strongly positioned for growth in the E.U. thanks to Tilray's investment in production facilities there. Currently, Aphria's share of the German medicinal cannabis market is significant, so further expansion into Europe could fit within its current competencies. The elephant in the room is profitability; while Aphria posts operational profits, Tilray isn't close to being profitable, and it's unclear how a merger will solve that problem. 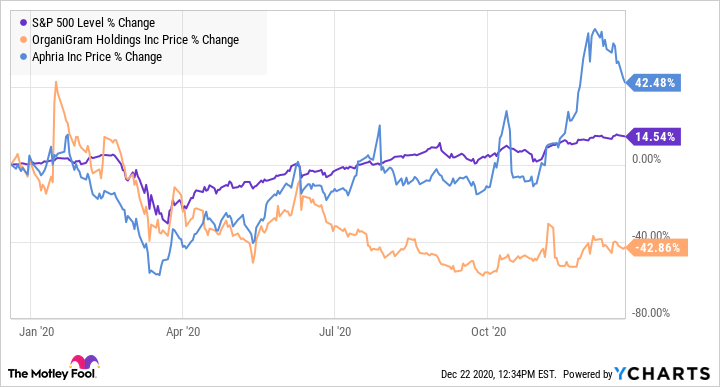 Which unprofitable company is a better buy?

If Aphria's plan to merge with Tilray is successful, it'll be more formidable a pick than OrganiGram by a mile. Whereas the new entity could lean on Aphria's increasing operational profitability to generate cash flow, OrganiGram continues to fall further and further away from consistent and positive earnings.

Rather than being a niche player in the Canadian recreational market like OrganiGram, Aphria and Tilray would be the operator to beat in both the medicinal and adult-use markets across the northern hemisphere. But in this case, patience is a virtue. I'd hold off on a purchase until the combined companies report a few quarters of positive earnings.