For shareholders of Disney (NYSE:DIS), 2020 was the best of times and it was the worst of times.

The company has fantastic intellectual property rights. It owns Star Wars and ESPN and Pixar and the Marvel Cinematic Universe. And last year, it unveiled its new streaming service, Disney+, which rapidly became a huge hit, racking up 73 million subscribers.

On the other hand, Disney has assets that have been pummeled by the coronavirus pandemic. The company's theme parks were closed for much of the year -- most of Disneyland still is, and even those parks that are open are only allowing a limited number of visitors. Its cruise ships are sitting empty at the dock. And film and television production was halted for months.

Reflecting and anticipating all this bad news -- and the retirement of CEO Bob Iger -- Disney's stock dropped from $145 a share in January to $84 in March. Optimists who bought near the bottom of that pandemic trough saw their money double. By the time effective COVID-19 vaccines started getting emergency use authorizations in December, Disney's stock had climbed to new all-time highs of $173 a share. It was like riding Space Mountain, except you made money. 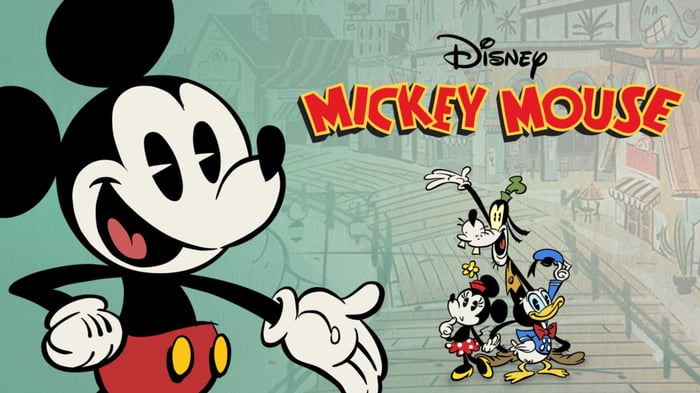 Disney's fiscal first-quarter 2020 ended on Dec. 28, 2019. So the February earnings call largely focused on last year. The entertainment giant had seven tentpole movie releases in 2019, each one taking in over $1 billion in ticket sales: Aladdin, The Lion King, Frozen 2, Captain Marvel, Toy Story 4, The Rise of Skywalker and Avengers: Endgame. Overall, the company reported $11 billion in total box office for the calendar year. That shattered the industry's previous single-studio record of $7.6 billion, also set by Disney in 2016.

In February CEO Iger reported that Disney+ numbers had hit 26.5 million by the end of the first quarter. Everything was looking great, except for one ominous shadow: "...we've temporarily closed our parks in Shanghai and Hong Kong, and we will continue to closely monitor this public health crisis."

At the end of February, Iger surprised the market by abruptly resigning. He had been the force behind many of Disney's amazing acquisitions.

While Iger remained as executive chairman of the board, Bob Chapek, who had previously run Disney's theme parks, was tapped to replace him as CEO. There was a bit of irony in the selection because one of Chapek's first tasks upon taking over as CEO was to shut down the parks in March.

In his first quarterly conference call, Chapek detailed all the bad news: "In mid-March, we closed our domestic parks and hotels indefinitely, suspended our cruise line, halted film and TV productions and shuttered our retail stores." In April, Iger took on a much more active role in advising Chapek on how to deal with the crisis and some people were referring to him as an unofficial co-CEO (which he is still doing as of December). For the quarter, earnings dropped by more than 60% year over year.

By the fiscal third quarter, which covered April, May, and June, Disney's numbers were an abomination. Adjusted earnings were down 94% from the year-ago quarter. The parks, experiences, and products division lost $3.5 billion. Overall, the company estimated that COVID-19 caused Disney to lose $2.9 billion in the period.

There was some positive news. Disney announced on the call that it was reopening some of its parks, including Shanghai, Paris, Tokyo, and Orlando. By the time of the early August earnings report, some professional sports had resumed, which was good news for ESPN. And Disney+ had continued its torrid growth: By August, the number of subscribers had jumped to 60 million.

Of course, the stock market is a forward-looking mechanism, so Disney's stock price actually started to recover before the underlying business did. From its $84 a share low in March, by early August, it was back up to $120 -- better, but still down by about 17% for the year. 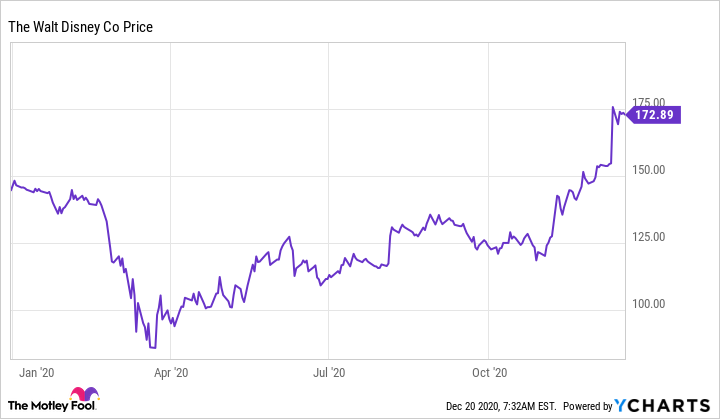 While the numbers in the fiscal fourth quarter were still bad, there were many bright spots. Disney's streaming numbers were fantastic -- the company reported 120 million subscriptions worldwide. The largest share of that number was the 73 million for Disney+, but it included impressive totals for Hulu and ESPN+.

Disney's animators were able to work remotely during the pandemic. And many of the company's film productions were able to restart work while operating under careful health protocols. Chapek reported that over 100 live-action projects were in active production, with dozens more in pre- and post-production.

Overall, the numbers were still awful. Disney estimated that COVID-19 cost it $3.1 billion in the three-month period that ended Sept. 30. That makes a $6 billion loss in six months, or a billion a month. And yet the market could now see the light at the end of the tunnel. Positive news from clinical trials of COVID-19 vaccine candidates sent the stock soaring higher. By late December, the share price was up 19% for the year.

While 2020 was largely a lost year for the company, all the setbacks appear to have been temporary. Meanwhile, the market has noticed the incredible gains Disney+ has made in this environment. Disney has a commanding position as the king of all media stocks. Once we move into 2021, and the theme parks are open and the cruises are sailing, its revenue and earnings numbers will dramatically improve. Investors are bullish heading into the new year.