Few companies have been hit harder by the pandemic than Live Nation Entertainment (NYSE:LYV). As a concert promoter, the company been forced to suspend the vast majority of its schedule, and delays are likely to continue as long as social distancing is the norm.

But before the pandemic, Live Nation was a consistent winner. The company, which also owns Ticketmaster, the country's largest ticketing service, is a top dog in live entertainment. It manages many popular artists and is able to demand that venues that host its events use Ticketmaster. That model helped the company deliver nearly $1 billion in adjusted operating income last year on $11.5 billion in revenue. 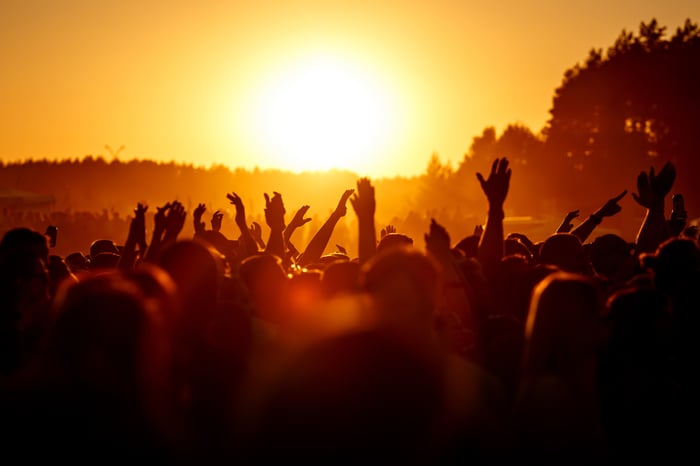 However, Live Nation is operating in a much different environment now, and the company has been forced to borrow to fund the business during the pandemic. Surprisingly, though, the stock has recouped its losses for the year and is now essentially flat, as the chart below shows. 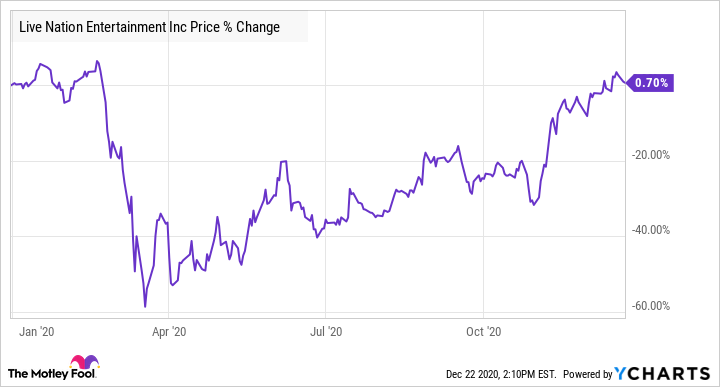 Let's look at where Live Nation stands today to determine whether the stock is a buy.

Live Nation during the pandemic

Like other entertainment-focused businesses including move theaters and theme parks, Live Nation's business has been decimated during the crisis. Revenue through the first three quarters is down 81% to $1.6 billion. It went from an adjusted operating profit of $861.8 million to a loss of $771.6 million. During the peak summer period in the third quarter, revenue plunged 95% to just $184 million.

Live Nation has raised enough cash to give it sufficient liquidity to survive the crisis. It ended September with $2.6 billion in cash, slightly higher than where it started this year. But the company has had to add to its already substantial debt burden as long-term debt has increased from $3.3 billion to $4.8 billion through the end of September. In December, Live Nation said it would offer another $500 million in debt at a 6.5% interest rate, and borrowing seems likely to continue until the pandemic is brought under control.

Still, there are some positive signs. The company is on track to cut costs by $900 million this year, and said 83% of its fans have chosen to keep tickets for rescheduled shows rather than get refunds. It also pointed to a survey that showed 95% of fans plan to start going to live events again when restrictions are lifted, a sign that the business should snap back quickly once the pandemic is over.

Live Nation should also benefit from pent-up demand for concerts and events once the pandemic is over, but in the meantime it has to endure what's likely to be several months of restrictions around the world as cases are still rapidly rising in places like the U.S. and Europe.

Even before the pandemic, Live Nation was struggling with a sizable debt burden as its 2019 interest expense of $157.5 million made up nearly half of its generally accepted accounting principles (GAAP) operating profit at $324.8 million. With its debt already up by more than 50% this year, interest expense will also surge, cutting into its already thin net margin. That means that even the effects of pent-up demand on its recovery will be muted as the company will need to grow operating income significantly just to get back to where it was on the bottom line before the pandemic.

Add it all up, and Live Nation is a company with a solid business model, but with a lot of a debt, thin profits, and operations in a mature industry that has been kneecapped by the coronavirus pandemic. Given those circumstances, why this stock is trading near all-time highs is a mystery, especially because when it was worth the same value at the start of 2020, expectations of a record year were baked into that price.

Analysts are still expecting substantial losses for 2021 and for revenue to be down about a third from 2019 results, showing that the road to recovery will be a long one. At this point, Live Nation still faces strong headwinds for at least another quarter or two and will likely have to borrow more money. The stock looks overvalued for now, trading at pre-pandemic levels. Investors are better off looking elsewhere for recovery stocks.