The device will serve up hot video game action and hot chicken simultaneously.

KFC, the famous fried chicken subsidiary of Yum! Brands ( YUM 3.24% ) and runner-up for world's biggest restaurant chain by sales, is apparently moving ahead with its plan to release the KFConsole, a high-powered gaming computer that also keeps chicken warm. Made to resemble a fried chicken bucket in general outline, the PC features a high-performance gaming setup that supports virtual reality (VR) and 4K TV games, according to IGN and other sources.

Other specs include an Intel Nuc9 Extreme Compute Element, a framerate of 240 frames per second (fps), and a 1-terabyte SSD from Seagate, Engadget reports. Neither KFC nor the KFConsole's maker Cooler Master has indicated a price at this point, but the Intel Nuc9 alone costs $3,100. 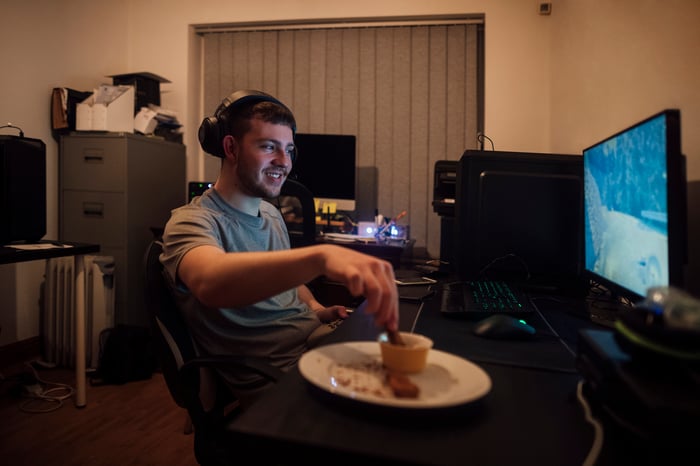 The PC is also designed to keep KFC munchies close at hand. The device features a drawer containing a tray where pieces of chicken can be placed to keep them warm while you're gaming, with Cooler Master stating this "Chicken Chamber" will use the computer's "natural heat and airflow system," enabling you to "focus on your gameplay and enjoy hot, crispy chicken between rounds."

The strange gaming gimmick echoes a recent device in the shape of a six-pack produced by Anheuser-Busch InBev under the name of the Bud Light BL6 console. This hybrid creation, of which only one was built, functions as a gaming console, projector, and two-can "beer koozie." There is no indication of how many KFConsoles -- "forged in the fires of the KFC ovens," Cooler Master says -- will be built.

The announcement is the second unusual KFC promotion launched by Yum! Brands this month. The first was a 15-minute comedy short entitled A Recipe for Seduction on Lifetime, featuring a fictionalized Colonel Sanders as a Casanova-like chef.