Please ensure Javascript is enabled for purposes of website accessibility
Free Article Join Over 1 Million Premium Members And Get More In-Depth Stock Guidance and Research
By Zhiyuan Sun - Dec 23, 2020 at 7:03AM

This blue-chip biotech is a risky bet going forward, but it is also dirt cheap.

Gilead Sciences ( GILD 0.09% ) has become a rather peculiar stock this year. On the one hand, the company has many investors excited about its coronavirus treatment, Veklury. On the other, its stock has fallen about 5% year to date, far underperforming the S&P 500's 17% total gain during the same period.

The discrepancy between expectations and reality has left many wondering if the stock will end up higher in 2021 or continue to lag behind major indexes. From its financial updates, it seems like its shares are definitely undervalued, but may continue to trade at the same levels in the near future. Let's find out why this is the case. 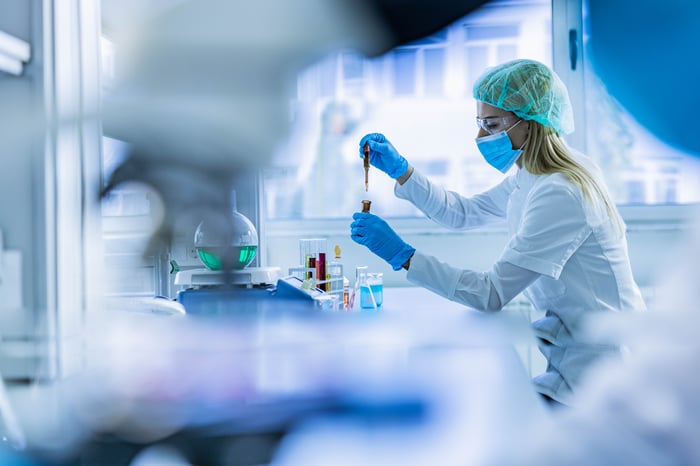 Gilead mainly focuses on developing treatments for viral diseases, inflammatory conditions, and various forms of cancer, and it has a promising HIV portfolio.

Right now, Gilead's Biktarvy is the No. 1 most prescribed HIV treatment in the U.S., with about one in two HIV positive individuals in the nation taking it. In clinical studies, Biktarvy was more than 90% effective at suppressing HIV as a stand-alone therapy. The drug has been a significant boost to Gilead's entire HIV portfolio. Revenue in this segment increased to $4.5 billion in the third quarter of 2020 from $4.2 billion in Q3 2019.

One area of Gilead's core business that's not performing well, however, is its line of hepatitis C (HCV) therapies. Don't get me wrong; its HCV franchise has helped cure millions of patients of the disease. The problem is that its treatments are so effective that they have largely shrunk the market opportunity. During Q3 2020, Gilead's HCV segment brought in $464 million in sales, down from the $674 million it brought in the prior year's quarter.

Overall, Gilead's third-quarter 2020 sales increased by 18% year over year to $6.49 billion. Meanwhile, its earnings per share (EPS) increased to $2.11, up 29% year over year. A large contributor to this growth stems not from its core portfolio, but due to the rollout of Veklury, the first drug approved by the U.S. Food and Drug Administration to treat COVID-19.

Veklury is generating an astonishing $873 million per quarter in sales despite receiving regulatory clearance less than seven months ago. Without Veklury, Gilead would have grown its revenue in Q3 by just 2%, and that momentum is about to end pretty fast.

You see, Veklury is only effective at improving time to recovery for patients with severe cases of COVID-19. There appears to be a survival benefit after patients took Veklury in clinical studies, but that therapeutic signal was not statistically significant compared to patients who didn't take it.

Multiple coronavirus vaccines are now entering the market and would arguably make Veklury redundant in a short time. Immunization aside, these vaccines can easily best what Veklury can deliver. For example, Moderna's messenger RNA coronavirus vaccine demonstrated in clinical studies that it was 100% effective in preventing severe cases of COVID-19.

While Veklury will likely cause a spike up and a quick spike down in Gilead's cash flow, the company has been making up for its lack of growth with acquisitions. In October, the company completed its $21 billion acquisition of Immunomedics, which markets Trodelvy to treat an aggressive form of breast cancer. In clinical trials, Trodelvy reduced the risk of death by 52% compared to chemotherapy.

Thanks to great efficacy, it should be no surprise that Trodelvy generated $73 million in revenue in the first five months since launch. This also isn't Gilead's only mega-acquisiton this year.

On Dec. 10, Gilead announced it would be acquiring Germany-based MYR Pharmaceuticals for 1.15 billion euros in cash. MYR possesses Hepcludex, the first and only drug (conditionally) approved by the European Medical Agency to treat chronic hepatitis D.

In its clinical trials, Hepcludex was 99% effective at clearing HDV genetic material from the bloodstream. There are over 15 million people worldwide living with chronic HDV.

Next year, Gilead's revenue and earnings will likely stall given the decline of Veklury and HCV segment revenue, counterbalanced by the growth of its HIV treatments, acquisitions, and new drug launches. Gilead has about 17 late-stage candidates in its pipeline with 51 clinical programs in total.

Fortunately for investors, all of Gilead's business risks are largely baked into its stock price. Based on its guidance of up to $23.5 billion in revenue and $6.60 in EPS this year, Gilead stock is only trading for three times sales and nine times earnings. That's a good bargain for a large-cap biotech.

One additional aspect to consider is its dividend. Gilead pays out $0.68 per share to stockholders every quarter, which works out to an annual yield of 4.6%. It is hugely competitive to the S&P 500's 1.54% dividend payout. Additionally, Gilead is earning more than $1.66 per share in terms of free cash flow, meaning it is more than able to continue fulfilling its dividend obligation.

Overall, for investors who are keen on value and love dividends, Gilead is an outstanding stock. For others who want to see substantial revenue growth from the businesses they own, the company will likely disappoint. It is worth considering other alternatives instead.