Despite having an IPO just three months ago, Compass Pathways (NASDAQ:CMPS) is already up a staggering 224% from its IPO price of $17. If you invested $10,000 in its first-ever public offering, that investment would be worth over $32,400 today, far outperforming the S&P 500's 11.3% gain during the same period.

Despite being a small fish in the biotech ocean, Compass Pathways has the backing of billionaire tech-investor Peter Thiel with a 10 million euro stake. Just what could spark so much interest in an early-stage company with only one pipeline candidate? 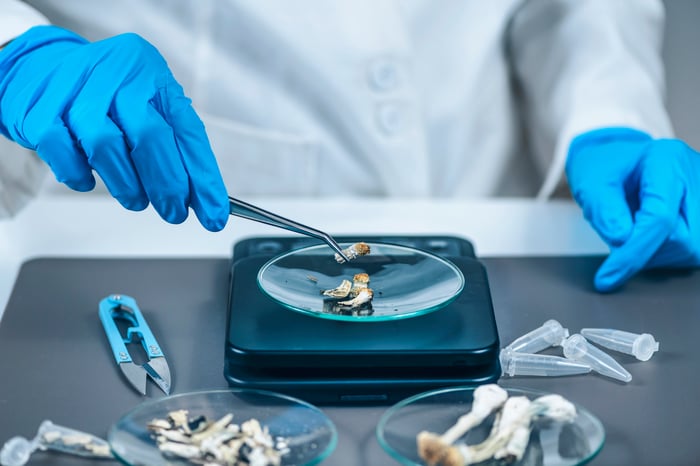 What's the company all about?

The hype surrounding Compass Pathways stems from COMP360, which is under phase 2 investigation for targeting treatment-resistant depression (TRD). COMP360 consists of synthetic psilocybin (colloquially known as "magic mushrooms"), a substance known to cause hallucinations and induce effects akin to spiritual awakening.

In 1971, the Nixon administration outlawed psilocybin as part of the War on Drugs initiative. It is still being labeled as a Schedule I substance, a classification usually reserved for drugs with high abuse potential and no medical benefits, such as heroin.

Recent scientific studies, however, have demonstrated otherwise. In four out of five clinical trials (the other lacked efficacy data) evaluating psilocybin for treating psychological distress and depression, patients who took the substance demonstrated remarkable relief. The results had robust statistical significance. In addition, the efficacy provided by psilocybin bested that of commercially available antidepressants such as citalopram (Celexa), fluoxetine (Prozac), and sertraline (Zoloft) by a very wide margin in comparison to historical studies.

The clinical trials are limited by their small scale, as they only enrolled a total of 120 patients altogether. Compass Pathways is taking the findings one step ahead. Its phase 2 results will likely come out by late 2021. Previously in phase 1, it found COMP360 did not cause serious adverse events when given to healthy volunteers. The substance also caused psychedelic effects that generally correlate with therapeutic benefits.

Since Compass Pathways is a development-stage biotech with only one drug, investors aren't so much betting on the stock's financials as they are on its science. If it proves that COMP360 can treat depression, it would be able to tackle a worldwide patient market amounting to over 320 million people and become a multiple-bagger stock. If not, then the company would likely trade at near $0 levels, as it only has about $196.5 million in cash compared to a market cap of $1.98 billion.

Based on the results of previous investigations, I think the company has a fair shot of advancing COMP360 to success in later-stage clinical testing. If approved, it would also be able to protect and commercialize its findings.

Even though there is nothing new about psilocybin, the company's synthetic variant has received patents. It could also receive market exclusivity, as regulatory authorities have not previously approved psilocybin for treating any kind of depression. Compass Pathways estimates it can receive up to 7.5 years of intellectual property protection in the U.S. and up to 11 years in the E.U. for COMP360.

At the end of the day, the stock is a good choice for investors with a high-risk, high-reward mindset. Others who are not particularly fond of upcoming volatile, binary movements in the stocks they own might consider other biotech stocks instead.