Peter Lynch, who ran the Fidelity Magellan Fund from 1977 to 1990, was famous for avoiding tech stocks. "I never really understood how electricity works," he once said in an interview. In his first two books, One Up On Wall Street and Beating the Street, Lynch laid out an investing philosophy that can be summed up as "invest in what you know."

While many investors buy fast-growing tech stocks without fully understanding them, Lynch had an impressive record buying a lot of under-the-radar stocks in simple (and sometimes boring) industries. How successful was he? If you invested $10,000 in his fund in 1977, your account balance would be up to $280,000 by 1990. In Lynch's lingo, that's a 28-bagger! 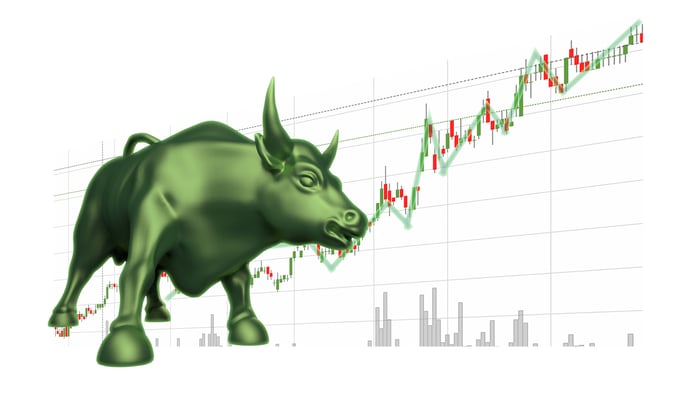 Lynch preferred stocks that are "easy to understand," so how did he get such amazing returns if his methodology didn't require a lot of brainwork? He did a massive amount of legwork instead. "I've always believed that searching for companies is like looking for grubs under rocks," he wrote. You might have to turn over 100 rocks to find a handful of grubs.

Why Freshpet is a Peter Lynch stock

Freshpet (NASDAQ:FRPT) is a "grub" that Lynch would love to discover. Imagine you're at a cocktail party, and other people are bragging about how they're investing in gene-splicing or space travel. And you say, "I'm buying dog food." That might sound dull, but he strived to avoid popular stocks and instead would buy companies that were out of favor.

Pet food is a good example -- it's boring, and most of the companies in the industry have hardly grown at all. The market for pet food is growing about 4% a year, a rate that barely beats inflation and underperforms the S&P 500. Even organic pet food, the "fast-growing" niche, has an expected growth rate of just 5%.

Freshpet is a top dog in refrigerated pet food. Lynch sought out fast-growing stocks in sleepy sectors, and that's what we have here. The company's revenue jumped 29% in the third quarter, trouncing the industry average. And this outperformance should actually accelerate. Demand for Freshpet's products is so high that the company has had trouble keeping up. It recently increased its manufacturing capacity by adding a second facility ("Kitchens 2.0"), a $100 million undertaking.

The company estimates its demand rate to be growing about 40%, and now that it has the capacity to meet this demand, revenue should grow nicely over the next year. As for the bottom line, Freshpet has achieved profitability with $3.9 million of earnings in the latest quarter.

The secret is out

Peter Lynch may have preferred under-the-radar small-cap companies, but running a multi-billion dollar investment fund, he had to buy a lot of small-cap stocks for this strategy to work. That's why he would routinely buy 1,000 stocks or more in a year. As individual investors, we don't have to buy 1,000 stocks. We can buy 5, 10, or 15 small caps and still generate solid returns -- the key is to have a few huge winners and hold onto these "super stocks." 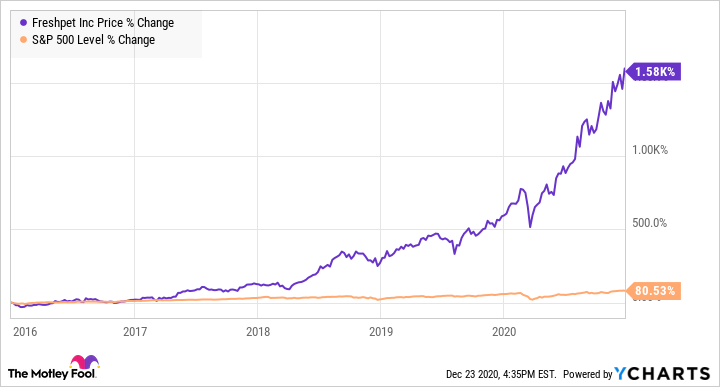 Of course, we all wish that we had bought Freshpet back in 2016. Now, a lot of analysts are starting to follow the company. But if this was a baseball game, we're probably in the third inning. Freshpet has already hit several home runs, but there's a lot of game left to play.

Its products are currently in 3.9 million households. There are 85 million households with a pet, just in the U.S., including 63 million dog owners. Worldwide, this is a massive $83 billion market. With approximately $300 million in revenue over the last year, Freshpet is a tiny player, but the upside is huge with more and more pet owners taking their dogs and cats off kibble and canned food and switching to refrigerated options.

Why Freshpet dominates this niche

In One Up on Wall Street, Lynch talks about L'eggs, one of the most successful consumer products of the 1970's. The company Hanesbrands put panty hose in colorful little egg-shaped containers and sold its L'eggs at checkout aisles in grocery stores. That was a key advantage as it made shopping incredibly convenient.

Freshpet has pulled off a similar feat with its refrigerated dog food. The company has donated thousands of refrigerators to major grocery store chains. So while you can find competing organic dog food in a Petsmart or other speciality store, it's highly likely the only refrigerator you will find in the pet food aisle of your grocery store belongs to Freshpet.

This is a serious advantage as more and more pet owners discover the appeal of refrigerated pet food. It's a very old concept, but refrigeration is now taking the pet food industry by storm. And Freshpet is leading the way.

While Peter Lynch's stock market lessons are decades old, his advice still holds true today. Freshpet's incredible run over the past five years is reminder that the strategy of "buying what you know" can still be incredibly powerful.