If you're looking for a good long-term investment, an exchange-traded fund (ETF) that's focused on the technology sector is a great place to look. The sector has driven the market to new highs for the past decade and has been one of the top-performing sectors for decades, even through periods of volatility.

As you seek out the right technology-focused ETF to invest in, know that they're not all the same. Some invest in a much broader swath of the sector, while others are more concentrated and focus on just information technology, for example, or some other area. Some look at just large caps, while others include smaller companies, too. Some have higher fees.

Two of the best and most popular options are the Fidelity MSCI Information Technology Index ETF (NYSEMKT:FTEC) and the State Street Technology Select SPDR Fund (NYSEMKT:XLK). These ETFs have some key differences. Let's examine both of them to see which is the better buy. 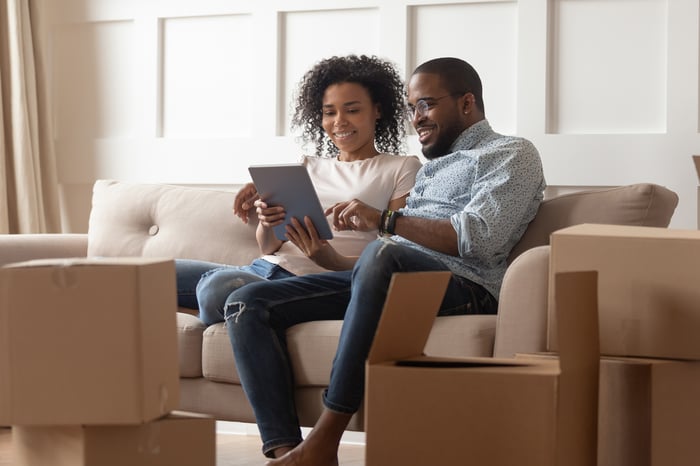 The Fidelity MSCI Information Technology Index ETF is one of the cheapest technology-focused ETFs on the market, with an expense ratio of 0.08%. It tracks the MSCI USA IMI Information Technology 25/50 Index. That may sound like an indecipherable mix of letters and numbers that make no sense. But there is a logic to it. Let's break it down a bit more and perhaps gain some insight into what this fund does.

MSCI stands for Morgan Stanley Capital International, which is an investment research firm that provides analytic tools to institutional investors as well as benchmark indexes for the markets. IMI stands for investable market index, which means it draws from the entire investable market of some 2,400 stocks, including large-, mid-, and small-cap names. That all goes to say that this fund selects stocks from the investable universe of the information technology (IT) sector, but it applies certain investment limits to help ensure diversification. That's the 25/50 part, which means no more than 25% of the fund's assets may be invested in a single stock and the sum of all issuers representing more than 5% of the fund can't exceed 50% of the fund's total assets.

Given all that, this is a broad-market technology IT fund that has, by its nature, a diversified portfolio with about 331 holdings that cover the spectrum of names from large-cap to small-cap. The two largest holdings are Apple at 20.9% of the overall fund and Microsoft at 15.5%, but everything else is 3.6% or lower. The ETF had a one-year return of 43.4% and a five-year annualized return of 25.4% through Nov. 30. Since its inception in 2013, it has a 22.7% annual return.

The State Street Technology Select SPDR Fund is different from the Fidelity ETF in several ways. First, it's one of the oldest and largest technology-focused ETFs on the market. The fund has been around since 1998 and has $37 billion in assets under management, making it the third-largest tech ETF.

It tracks the technology sector within the large-cap S&P 500 but isn't limited to just IT names, like the Fidelity fund. It includes stocks from companies in:

While it draws from a broader universe of technology industries than the Fidelity fund, it actually has a more concentrated portfolio with about 74 names, as it only includes large-cap stocks within the S&P 500. The two largest holdings are Apple (24.3%) and Microsoft (19.4%).

These are two of the largest and best-performing ETFs in the technology sector, so you really can't go wrong with either one. But I'd go with the Fidelity MSCI Information Technology Index ETF if I had to pick one. The returns have been slightly better and the expense ratio is slightly lower.

In addition, I prefer the broader diversification of the fund, as it has more holdings and chooses from a wider selection of technology stocks, including large, mid, and small caps. Plus, the asset-weighting caps provide some stability in what can be a volatile sector.