Please ensure Javascript is enabled for purposes of website accessibility
Free Article Join Over 1 Million Premium Members And Get More In-Depth Stock Guidance and Research
By Matthew Frankel, CFP® - Dec 30, 2020 at 6:27AM

Your money could be in your bank account sooner than you think.

As part of the $900 billion COVID-19 relief package that was just passed -- formally known as the Coronavirus Response and Relief Supplemental Appropriations Act -- Congress authorized a second round of economic impact payments.

More commonly known as stimulus checks, the second round of payments is going to be smaller than the first. Individual taxpayers are eligible to receive as much as $600, while married couples can get $1,200. There is an additional $600 payment available for each dependent child as well.

In March, the first round of stimulus checks authorized by the CARES Act took a couple of weeks to roll out. It took several months before everyone received their checks. But we just found out that things will move quite a bit faster this time around. 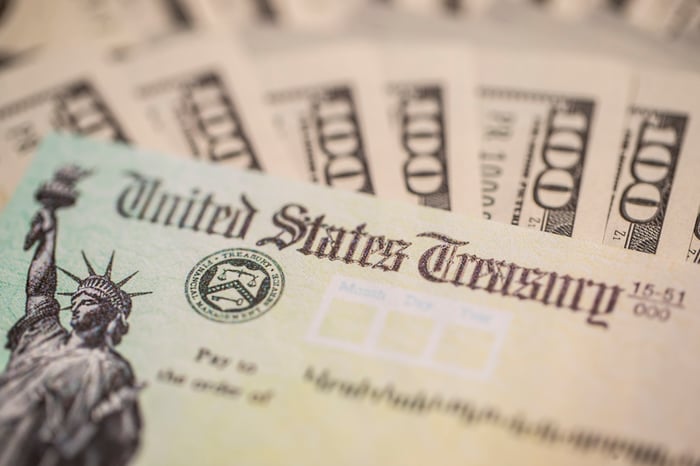 On Tuesday, Dec. 29, Treasury Secretary Steven Mnuchin announced that the Treasury had delivered a payment file to the Federal Reserve and stimulus payments are already starting to be processed. This isn't the first round of stimulus checks, so there's already a process in place, which appears to have cut down the rollout time. In fact, Mnuchin said that some people might start receiving payments that night. By the time you read this, your stimulus payment might already be in your bank account.

Eligible individuals don't need to take any action to get paid. The payments will be rolled out automatically in nearly all cases. If the IRS has your direct deposit information and you meet the eligibility requirements, you'll get a direct deposit to your bank account. If you received the first stimulus check in the form of an actual paper check, that's what you'll likely receive this time. If you received the first payment via debit card or you're a Social Security beneficiary who received the first payment via Direct Express, that's what will happen this time as well.

Not everyone will get paid right away

For the most part, the second stimulus checks are going to be rolled out much quicker than the first. The IRS and Treasury anticipate getting out all of the automatic payments, including checks, before the end of January.

However, this might not happen in all cases. If you're eligible for the second stimulus check and don't get it for one reason or another (for example, you're a recent college graduate, your 2020 income qualifies but your 2019 income doesn't, etc.), you can claim it when you file your 2020 tax return in early 2021. Technically speaking, the stimulus payments are an advance on the Recovery Rebate Credit, which will be included on the 2020 Form 1040.

Unlike the first round of payments, it doesn't appear that there will be a way for taxpayers to register for the second stimulus check if they didn't file a 2019 tax return and didn't receive the first stimulus payment from the IRS. However, with tax season right around the corner, it won't be long before the IRS starts processing tax returns and payments can be obtained that way.

What if Congress approves $2,000 payments instead?

One of the top news stories right now is the push for stimulus payments to increase from $600 to $2,000 per person. President Trump called for such an increase and the House of Representatives passed a bill authorizing it. It's unclear whether it will get through the Senate. What happens if it does?

According to an email the IRS sent on Tuesday night, "if additional legislation is enacted to provide for an additional amount, the economic impact payments that have been issued will be topped up as quickly as possible." In other words, if you're an eligible single taxpayer and receive a $600 payment this week and Congress subsequently authorizes $2,000 payments instead, you can expect to see a $1,400 additional payment sometime after.

How to check on your payment

Taxpayers can check on the status of their second stimulus check through the same Get My Payment portal used previously. The site is currently offline while the Treasury and the IRS update the system's data for the new payments, but the IRS says it should be functional later in the week.

The bottom line is that the second stimulus check appears to be rolling out quickly and more efficiently than the first, thanks to the mechanisms already in place from the first round of checks. If you're eligible, you'll likely have your money very soon.