Fintech, or financial technology, is one of the most exciting growth opportunities in the stock market. The global payments industry is estimated to be worth $185 trillion, and the majority of payment transactions around the world still take place in cash. There's a tremendous opportunity in the cashless payments space, especially in parts of the world where e-commerce and credit card adoption are still nascent.

With that in mind, Argentina-based MercadoLibre (NASDAQ:MELI) could be a smart way to get fintech exposure in your portfolio as we head into 2021. 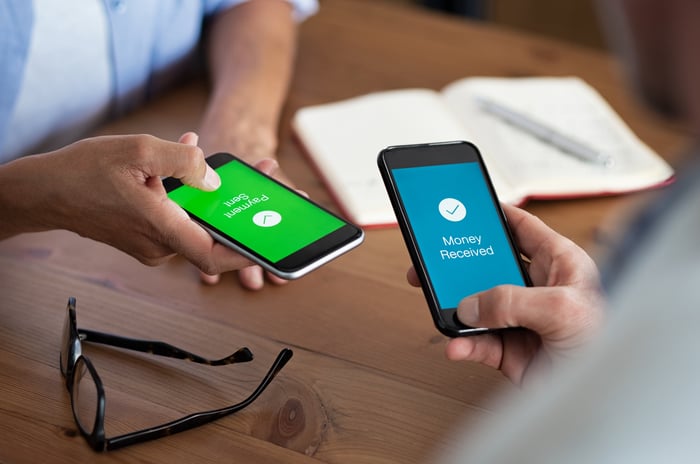 Even if you're familiar with MercadoLibre's business, you may only know one side of the company.

MercadoLibre is primarily known for its e-commerce marketplace, which is a market leader in Argentina, Brazil, and several other Latin American countries. Indeed, the company is commonly referred to as the Amazon (NASDAQ:AMZN) of Latin America.

However, MercadoLibre also has a fast-growing payment processing business called Mercado Pago. Think of the relationship between MercadoLibre and Mercado Pago like eBay (NASDAQ:EBAY) and PayPal (NASDAQ:PYPL) when they were still part of the same company. Mercado Pago is the payment processor for the company's e-commerce platform. That's exciting enough, but it's rapidly growing its off-platform capabilities as well. While PayPal used to just be how you paid for things on eBay, it has evolved into a massive part of the U.S. payment landscape with about $1 trillion of annualized payment volume flowing through its platforms. That's where Mercado Pago could be heading.

Why MercadoLibre could be just getting started

Growth has been extremely impressive on both sides of MercadoLibre's business. Mercado Pago's payment volume has grown more than tenfold since 2014, and the merchandise sold on the marketplace has more than tripled.

What's more, the COVID-19 pandemic has helped accelerate growth in 2020 as people were forced to shop from home. Merchandise volume on the marketplace has doubled, and Mercado Pago's payment volume in the third quarter was 161% higher than a year earlier. The strongest growth has been in payment volume outside of MercadoLibre's marketplace.

Even so, there could still be a ton of room to grow. Sure, the $6 billion of merchandise volume MercadoLibre's marketplace reported in the third quarter is impressive, but Amazon does more than that during its annual Prime Day event. On the payments side, Mercado Pago's $14.5 billion in third-quarter payment volume is a big number -- but compare that to the $247 billion PayPal did in the same quarter.

It's also worth pointing out that Latin America has a larger population than the United States. Most parts of the region are still in the very early stages of cashless payments adoption. In the U.S., we often take for granted that we'll be able to pay with a credit card or mobile device wherever we go. That's simply not the case in many parts of the world.

A great way to play fintech in 2021 and beyond

MercadoLibre certainly isn't a cheap stock at more than 25 times trailing-12-month sales, but given the massive opportunity to grow the company over the next several years, it's not an expensive one either. E-commerce and cashless payments are both likely to be huge growth markets for decades to come. MercadoLibre's dominant position in its core markets gives it a huge competitive advantage. I personally added MercadoLibre to my portfolio in 2020, and I'm seriously considering adding to my position in 2021.