Sunoco (NYSE:SUN) took its investors on a wild ride in 2020. The fuel distribution company lost nearly 60% of its value in March as it nosedived along with the broader market. While it has since recovered most of that loss, units of the master limited partnership (MLP) were still down about 8% on the year. Because of that, it significantly underperformed the S&P 500 even after adding in its monster 11.7%-yielding dividend.

With a lower share price and a big-time yield, investors might wonder whether the beaten-down energy stock is worth buying. Here's a look at the case for and against buying Sunoco these days. 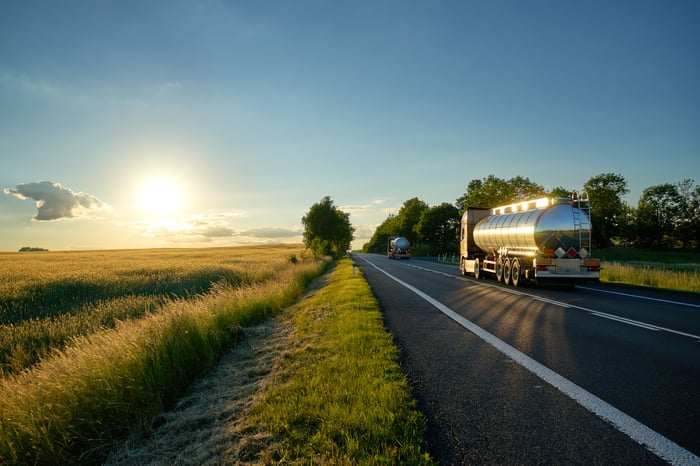 The case for buying Sunoco

Sunoco has undergone an impressive transformation in recent years. The company jettisoned most of its retail gas stations by selling them to 7-Eleven and other operators. It used the proceeds to pay down debt and expand its fuel distribution and midstream businesses. As a result, the company generates stable earnings backed by long-term, take-or-pay fuel distribution contracts and rental agreements. That stability has been on full display this year as Sunoco is on track to grow its adjusted EBITDA to more than $740 million in 2020. That would put it above the highs before it exited retail, despite all the turbulence in the energy markets this year.

The company's cash distribution -- which it has maintained throughout this transition -- is on an increasingly secure footing. Sunoco has generated enough cash to cover its high-yielding payout by 1.56 times over the last 12 months. Meanwhile, the company has gotten more conservative in its long-term planning by raising its targeted coverage ratio from at least 1.2 times to more than 1.4 times.

Leverage has also come down. In 2017, Sunoco's debt to EBITDA ratio was above 5.5 times. However, it averaged 3.93 times over the past year. That's below its 4.0 times target, which Sunoco reduced from its prior range of 4.5 to 4.75 times due to its increased fiscal conservatism.

Sunoco expects its fuel distribution expansion strategy to continue paying dividends in 2021. The company has acquired several fuel distribution companies in recent years while also expanding its midstream footprint to support its fuel distribution operations. These investments have it on track to generate between $725 million and $765 million of adjusted EBITDA in 2021. Meanwhile, it intends to invest another $120 million to grow its business in the coming year, an increase from the $75 million it expected to spend during the pandemic-disrupted 2020. Those investments, which Sunoco plans on self-funding, should enable it to grow its earnings in the coming years, putting its high-yielding payout on an even more sustainable footing.

The case against buying Sunoco

While Sunoco has made significant progress in improving its financial profile, its metrics still lag other MLPs. Most have bumped up their distribution coverage target to between 1.5 times and 2.0 times. Meanwhile, many MLPs are aiming to get their leverage ratio below 3.5 times. Sunoco thus doesn't have as much financial flexibility as its rivals, which could impact its ability to continue making acquisitions.

However, Sunoco's more pressing issue is the energy transition from fossil fuels toward cleaner energy sources like renewables. While this shift will take decades, a growing percentage of the global transportation fleet will be lower-emissions vehicles like electric vehicles (EVs) or those powered by natural gas or other clearer fuel sources in the coming years. The only question is how fast the transition happens, as that will affect how quickly demand for gasoline and diesel decline. Even in a slow transition, it will be hard for Sunoco to organically grow its fuel volumes and margins. It could also be tougher for the company to renew existing contracts at higher rates. Its earnings could therefore be under pressure in the coming years.

Much improved, but going against a major headwind

Sunoco's transition to a fuel distribution company has started paying dividends. Its earnings and balance sheet have both improved, putting its high-yielding dividend on a firmer foundation. It has also given it more financial flexibility to continue gobbling up smaller rivals.

However, with the shift toward renewable energy accelerating, the company's business will likely be under pressure in the coming years. Because of that, it just doesn't stand out as a compelling buy these days in a crowded field of high yielding energy stocks.