Investors looking for a stable stock that returns a ton of cash to shareholders might scratch their heads if someone suggested AT&T (NYSE:T). The stock is about the same price as it was 25 years ago, and the company's recent acquisitions have left it saddled with debt.

Additionally, investors might be worried after the recently announced first-quarter dividend didn't include an increase for the first time since 2003; a new CEO has clarified the strategy for the next few years and those dividend hikes are up in the air for now. But AT&T's stock is at a historically low valuation and the business is generating enough free cash flow to pay off debt and invest in growth while sustaining its current dividend, which is yielding about 7% as of this writing. This might make the stock a no-brainer for retirees looking for a high yield with the stability of a blue chip company. 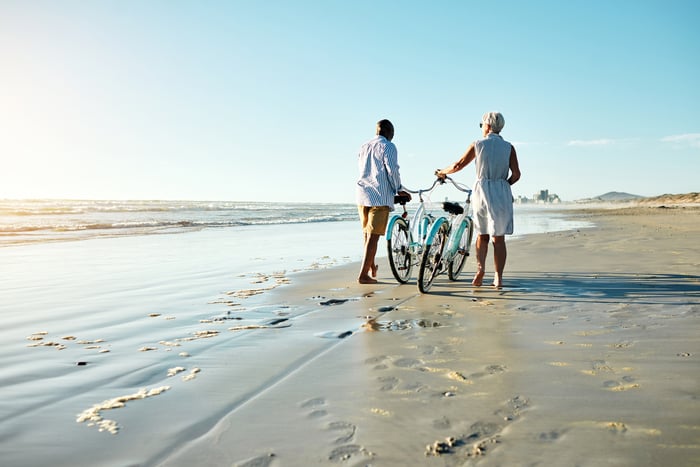 There is no question AT&T has become a complex combination of businesses. Its communications segment makes up roughly 79% of revenue and includes wireless phone service, residential broadband, and voice and data services to businesses. The WarnerMedia segment, which accounts for about 17% of revenue, is responsible for film and television content from well-known providers Turner, HBO, and Warner Bros. There is also a Latin American segment and an advertising services segment named Xandr. Together, all the business segments generated $173 billion in revenue in the 12 months ended in September, a 5% decrease from the previous 12-month period. The drop was largely due to the lack of movie and television releases, as well as the associated lost advertising revenue due to the pandemic.

The largest business segments are the results of two megadeals that expanded the company and added a ton of debt to its balance sheet. In 2015, AT&T completed the acquisition of DIRECTV for $48.5 billion, becoming the world's largest pay-TV provider. At the time, the combined business served 26 million customers in the U.S. That number had collapsed to less than 18 million at the end of September as cable subscribers cut the cord in favor of programming viewed directly over the internet.

Reports have been circling for months that AT&T is looking to unload a minority stake in DIRECTV but has turned down offers it considered too low.  The jury is still out on the 2018 acquisition of Time Warner for $85 billion that left the company with $180 billion in debt but brought in the content for the company's HBO MAX streaming service.

Now that AT&T has the assets to offer both connectivity and content, it's up to new CEO John Stankey to put the company's prodigious cash flow to work and find a balance between investing for the future, paying off debt, and keeping up the streak of 36 consecutive years of dividend raises.

The balancing act won't be easy, but there is enough cash coming in the door to allocate capital in all directions. Management expects to generate $26 billion in free cash flow this year. That is less than the $29 billion in 2019, but COVID-19 disruptions affected the first half of 2020. The trend turned around in the third quarter, which ended Sept. 30, when free cash flow increased to $8.3 billion up from $6.2 billion last year. The quarter also saw subscriber growth in both wireless and broadband, areas that are crucial to generating the cash necessary for investments and dividends.

Stankey believes the company has plenty of flexibility and laid out the math to analysts in early December, saying, "... if you think about $26 billion of free cash flow into '21, about $21 billion of capital, and then you think about the things that we want to do in our business, we feel really good. We're in a position to be able to fund and commit to those things that are important."

One of the important things he mentioned was sustaining the dividend. He also mentioned "opportunities to do some things around rejiggering our portfolio that can accelerate some of that restructuring of the balance sheet" for even more room to breathe.

The company has already lowered the cost of its debt financing and the average interest rate on the company's debt is now at 4.1%, the lowest it has ever been. But investors clearly have their doubts that the recipe is sustainable, as shares trade at the lowest multiple to free cash flow in at least 20 years. 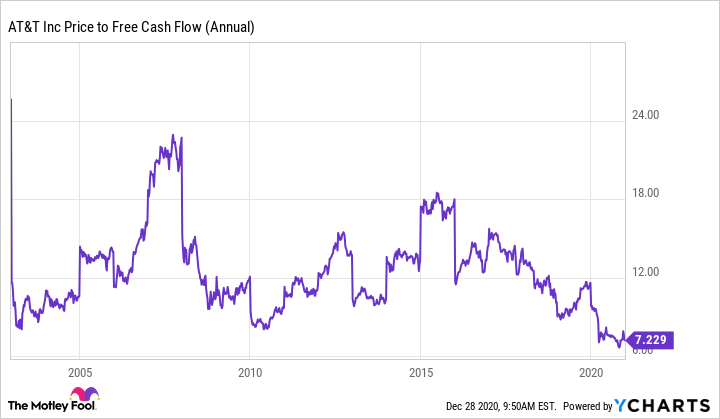 Ultimately, the question of whether AT&T will make a good investment for retirees will come down to Stankey's ability to sustain revenue in a world where more customers are shunning cable television. It's understandable that Wall Street is skeptical. Long-term debt stands at $159 billion and the dividend has been raised only a penny each year since 2008 with the aforementioned lack of increase so far for 2021.

Those are legitimate strikes against the stock, but the best investments aren't usually easy to make. The key is seeing that a struggling business is turning around. Often that can be easier to see, and believe, under new leadership. Stankey only took over as CEO in July, but the green shoots of change are starting to become visible. More than 1 million wireless subscribers were added in the third quarter, as well as 350,000 net additions for the company's fiber internet service. Those numbers dwarfed rival Verizon, which added 142,000 wireless and 144,000 fiber customers in the same quarter. Also, the company's HBO MAX streaming service was at 57 million global subscribers as of October 2020, well beyond management's initial target for the end of the year.

The CEO has said sustaining the dividend is a priority, AT&T is priced at a historically low multiple of free cash flow, the company is successfully managing its debt, and seeing subscriber growth in streaming, wireless, and fiber. A dividend increase for 2021 isn't off the table either. The company can maintain its streak of yearly increases as long as the payout is bumped by the fourth quarter.

Retirees looking for high yield should consider adding AT&T to their portfolio. As long as the company generates current levels of free cash flow, management has laid out a road map for continued dividends and possible stock appreciation once Wall Street gains confidence in the plan.