Please ensure Javascript is enabled for purposes of website accessibility
Free Article Join Over 1 Million Premium Members And Get More In-Depth Stock Guidance and Research
By Beth McKenna - Jan 3, 2021 at 11:44AM

Early investors in this newly public snack food maker are solidly in the chips.

Shares of salty snack food leader Utz Brands ( UTZ 0.21% ) rose 9.3% (9.6% if we include dividends) in December, according to data from S&P Global Market Intelligence. 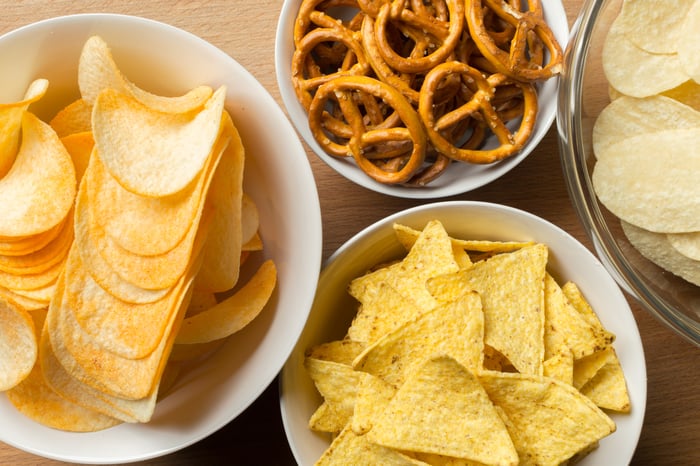 We can attribute Utz stock's strong performance last month in part to a continuation of the momentum it's had since going public in late August via a reverse merger with a special-purpose acquisition company (SPAC). (This method of going public is faster and less expensive than the traditional initial public offering, or IPO, route.) Since joining the public markets, shares have returned 35.8%, compared with the broader market's 7.7% return over this period.

This momentum is largely thanks to investors continuing to discover that Utz is now publicly traded and to the COVID-19 pandemic. During the crisis, consumers have increased their buying of "comfort foods," particularly from well-known brands. The nearly 100-year-old Pennsylvania-based company is benefiting from this trend, with its year-over-year sales for the third quarter jumping 24%, or 7.2% excluding acquisitions, to $248 million. Along with its namesake brand, some of its other brands are Bachman, Zapp's, Golden Flake, Good Health, and TORTIYAHS!.

In addition, Utz stock got a boost following the company's Dec. 14 announcement that it had completed its previously announced acquisition of Truco Enterprises, a leading seller of tortilla chips, salsa, and queso under the ON THE BORDER brand for $480 million.

While Utz had a net loss of $7.3 million in the third quarter, the loss was due to expenses associated with going public. On an adjusted basis, which excludes one-time expenses, the company posted net income of $17.9 million, up from $8.5 million in the year-ago period.

For full-year 2020, management guided for organic sales growth (excludes acquisitions made during the last year) of 10% to 11% year over year.

Why Utz Stock Fell on Thursday Despite Earnings Crushing Expectations