Shares of Tesla (NASDAQ:TSLA) rose 24.3% in December, according to data from YCharts. The red-hot electric vehicle manufacturer appears to have benefited from being added to the S&P 500 index, strong vehicle delivery numbers, and favorable coverage from analysts. 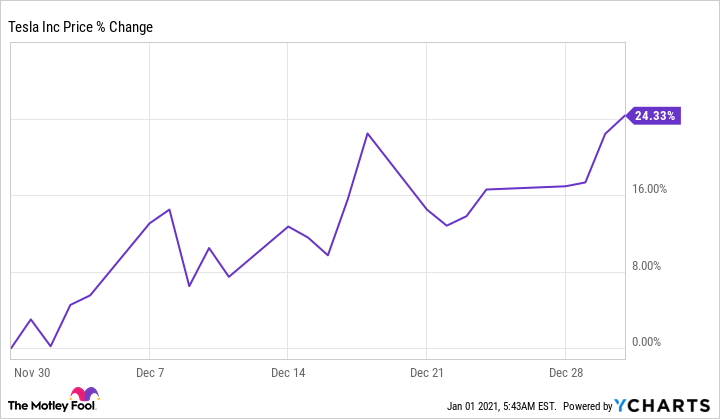 Tesla was added to the S&P 500 before the market opened on Dec. 21, which meant that the many funds tracking the popular index had to acquire the company's shares. Anticipation of that likely provided an additional catalyst for its share price. Tesla closed out the year as the best-performing stock in the S&P 500, with shares gaining roughly 743% across the stretch.

Tesla's addition to the S&P 500 means that investors who purchase mutual funds or exchange-traded funds (ETFs) that track the index will also effectively be purchasing Tesla stock. Because of its high valuation, the company immediately become one of the biggest components of the market-capitalization-weighted index.

The EV specialist also saw strong vehicle delivery momentum last month. It notched 21,604 deliveries in November in China, according to the Tesmanian Blog. November deliveries were up roughly 78% compared to October's registrations.

JMP Securities analyst Joseph Osha published a note on the stock on Dec. 21, raising the firm's price target on it from $516 per share to $788 per share, and maintaining its outperform rating. Osha wrote that he expects the company to deliver 3.05 million vehicles worldwide in 2025, up from his previous forecast of 2.5 million deliveries.

On the same day, Wedbush analyst Daniel Ives also published a note on Tesla. He maintained a neutral rating on the stock, but raised the firm's price target from $560 per share to $715 per share. Ives cited rapidly accelerating global demand for electric vehicles and Tesla's leadership position in the category as reasons for the target price increase.

Tesla recently reported that it delivered 499,550 vehicles in 2020. That topped the market's expectations, but fell just shy of the company's ambitious 500,000-vehicle target. The company delivered 180,570 vehicles in the fourth quarter.

While most automakers' sales collapsed in 2020 due to the year's challenging economic conditions, Tesla continued to post impressive performance that evidenced strong demand. On the other hand, the electric vehicle leader undeniably trades at lofty valuation multiples. With a market capitalization of roughly $669 billion, it's priced at approximately 173.5 times this year's expected earnings and 15 times expected sales.

Tesla has repeatedly proved doubters wrong and dashed the hopes of short-sellers, but its highly growth-dependent valuation means that Elon Musk and Co. will need to keep surprising and delighting the market to support its share price.