Food delivery company DoorDash (NYSE:DASH) has apparently landed a deal with Albertsons Companies (NYSE:ACI), a major grocery and supermarket company whose chains include more than 2,700 stores, making it second in size only to Kroger (NYSE:KR) in the USA. Albertsons operates approximately 18 different chains, with major names among these including Safeway, Vons, Shaw's, Albertsons, Acme Markets, and Jewel-Osco.

According to reporting by SFGATE, Albertsons will start using DoorDash's delivery services for Safeway and Vons locations on Feb. 27. The supermarket company will also begin laying off delivery drivers for these chains. An Albertsons representative, Wendy Gutshall, said the move "will allow us to compete in the growing home delivery market more effectively" and that the new strategy resulted from "a great deal of consideration." 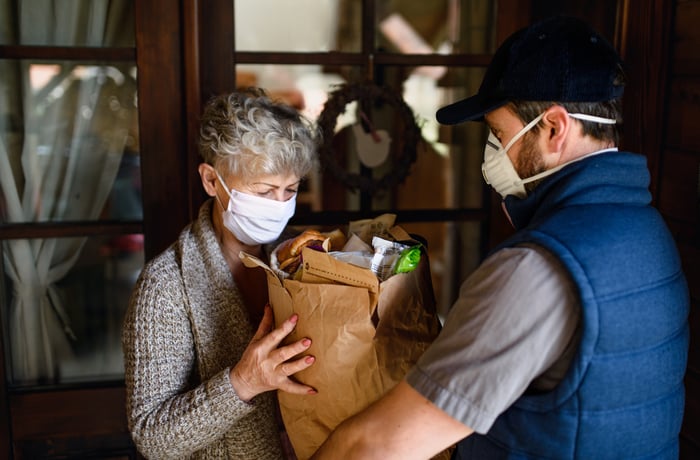 While the pact between DoorDash and Albertsons broke as a result of activist news reporting in California by Knock.LA, the Los Angeles Times reports DoorDash will start delivering for the chains everywhere across America and not just in the Golden State.

Several sources, including the California Labor Federation, nevertheless claim the alliance results directly from the passage of California's Proposition 22. The United Food and Commercial Workers International Union issued a statement claiming DoorDash and Albertsons are "exploiting" Prop 22 "to destroy the good-paying jobs of" drivers, whom the union calls "dedicated frontline workers" during the pandemic.

Proposition 22 allows delivery companies like DoorDash to classify their workers as independent contractors, so they don't have to offer standard employee benefits under labor law. DoorDash contributed $52.1 million to support Prop 22's passage.

DoorDash made a considerable splash with a high-priced IPO, but has since drawn predictions from analysts that it will be unable to "live up to" its $50 billion initial valuation.