Shares of recently IPO'd XPeng (NYSE:XPEV) tumbled 27.1% in December as the strong rally in Chinese electric-vehicle manufacturers lost steam at the end of the year.

Both NIO and Li Auto also declined after fabulous run-ups across the year. XPeng, which went public in August, had been carried higher by the enthusiasm exhibited for the category, but year-end cautiousness caused investors to pull back.

President Trump, for instance, signed a bill that could cause foreign companies not adhering to the same accounting standards U.S. companies follow to be delisted from U.S. stock exchanges. XPeng had previously identified material weaknesses in its accounting controls because its staff had insufficient understanding of U.S. accounting principles. Li Auto said something similar. 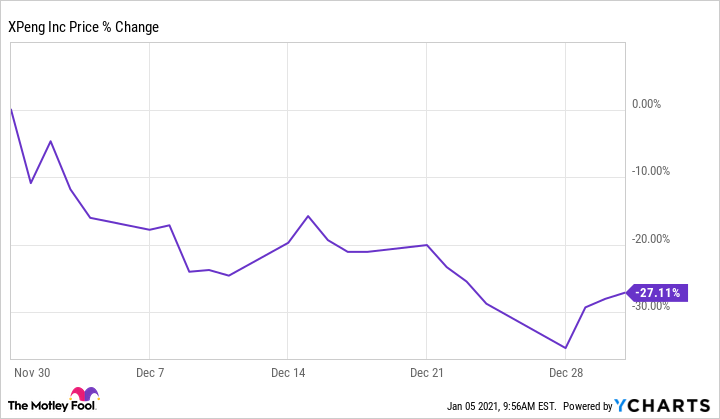 The quick run-up in their stocks also had analysts issuing sell recommendations based on valuation while increased competition is expected. Tesla is just one automaker that deems China an important growth market. Its Shanghai factory will be pumping out Model Y cars by the thousands.

XPeng is selling just about everything it can produce: Deliveries for December quadrupled and were up 112% for all of 2020 at 27,041. While government subsidies might still be cut, XPeng could defy expectations as it heads toward profitability in 2022.