Please ensure Javascript is enabled for purposes of website accessibility
Free Article Join Over 1 Million Premium Members And Get More In-Depth Stock Guidance and Research
By Will Healy - Jan 6, 2021 at 5:16PM

The government cites company ties to the Chinese military as a reason for this action.

The China stock ban may include two of the biggest companies trading on U.S. exchanges.

In November, an executive order by President Trump sought to ban investments in other companies with similar connections. Now, U.S. officials may also ban Americans from investing in Alibaba ( BABA -3.95% ) and Tencent Holdings ( TCEHY 1.33% ). Both the State Department and the Department of Defense have pushed for this ban, citing these companies' ties to China's military and security services.

The companies have a combined market cap of $1.3 trillion. Moreover, U.S. mutual funds and many institutional investors hold significant amounts of Alibaba and Tencent stock.

Still, despite their size, they do not appear on mainstream indexes. The Dow Jones Industrial Average, the Nasdaq, and the S&P 500 do not include these companies. 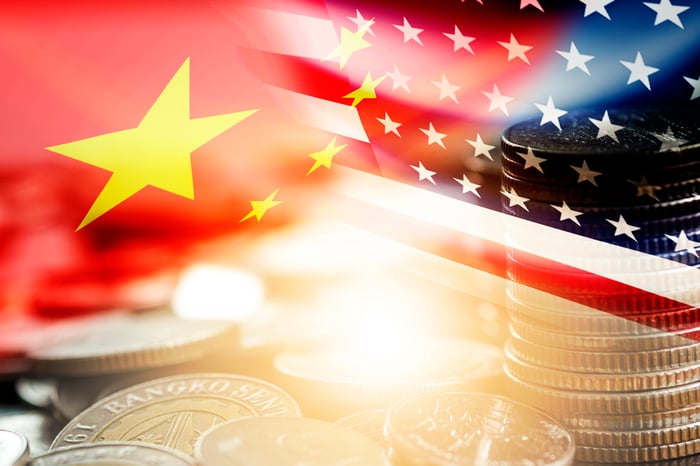 Additionally, China bans foreigners from owning shares in its companies. Instead, shareholders own parts of Cayman Islands-based holding companies contractually entitled to each company's profits.

Despite this alternative arrangement, both companies have raised tens of billions through these holding companies. If this ban takes hold, they lose a major source of investment capital.

Moreover, Tencent also owns WeChat and holds stakes in many U.S. gaming companies. Such a ban could make the future of WeChat in the U.S. and the state of these investments uncertain.

This directive also comes at a time when tensions are high on both sides of the Pacific. Alibaba founder Jack Ma lowered his profile in China following his criticism of the Chinese government.

In the U.S., the Trump Administration is working to accomplish as much as possible before Joe Biden becomes president. It is unclear whether Biden will retain this executive order once he takes office.