All eyes were on the Georgia special Senate run-off elections on Tuesday with the control of the U.S. Senate hanging in the balance. It looks like that control will shift from the GOP to the Democrats.

Democratic Senate candidate Rev. Raphael Warnock has already been declared the victor in his race against incumbent Republican Sen. Kelly Loeffler. In the other Senate run-off in Georgia, Democrat Jon Ossoff appears to have narrowly prevailed over incumbent GOP Sen. David Perdue.

After these run-offs, both Democrats and Republicans will hold 50 seats in the U.S. Senate. That will give the tie-breaking vote to Vice President-elect Kamala Harris, effectively handing control of the legislative chamber to the Democrats. This could have enormous implications for the cannabis industry. Here's what Georgia's Senate results likely mean for marijuana stocks. 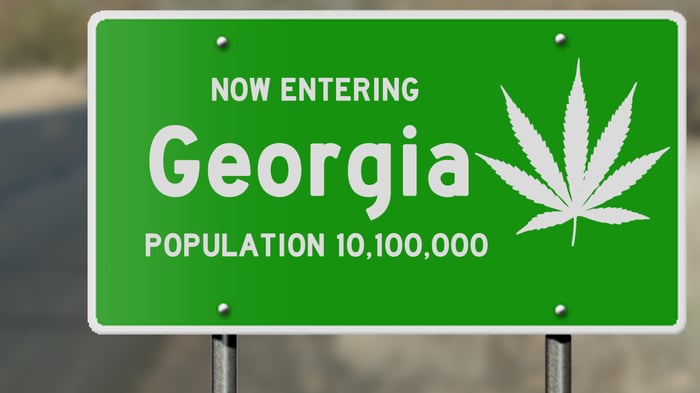 Paving the way for cannabis reform

The majority of Americans support legal cannabis. Thirty-five states have legalized cannabis for either medical or recreational use -- or both. But marijuana remains illegal at the federal level largely because of current Senate Majority Leader Mitch McConnell.

Sen. McConnell has adamantly opposed any changes to federal marijuana laws. He has used his position as Senate Majority Leader to prevent any legislation related to cannabis reform from coming to a vote on the Senate floor. Assuming Jon Ossoff defeats David Perdue, Sen. McConnell won't have the power to block cannabis bills for very much longer.

The U.S. House of Representatives has already passed the SAFE Banking Act, which addresses banking reform in the U.S. cannabis industry, and the MORE Act, which would decriminalize marijuana. Those votes don't count in the new Congress. However, look for the House to overwhelmingly pass similar legislation this year. It seems very likely that versions of the SAFE and MORE Acts will also pass in the Senate with Democrats in control.

Canadian cannabis producers have wanted to enter the lucrative U.S. market for a long time. It seems likely that they will get that opportunity, perhaps as soon as 2022.

Canopy Growth (NASDAQ:CGC) is arguably the biggest winner of the group. It's the biggest Canadian cannabis producer in terms of market cap. Canopy's option to acquire U.S. cannabis operator Acreage Holdings will enable the company to quickly move into the U.S. cannabis market if federal laws are changed. Canopy also has an ample cash stockpile to fund an expansion thanks to its big partner and largest shareholder, Constellation Brands.

U.S. cannabis operators would benefit in several key ways from cannabis reform measures. These companies could gain access to traditional banking services. They could also list their shares on major U.S. stock exchanges, providing even more access to growth capital.

Large and small U.S. cannabis operators are no doubt cheering the Georgia Senate results. Green Thumb Industries (OTC:GTBIF) probably stands among the loudest. Unlike Canopy and most of its Canadian peers, Green Thumb is already profitable and will almost certainly continue to generate solid profits in 2021. Its revenue handily surpassed Canopy's in the latest quarter.

But Green Thumb's market cap is currently only around half the size of Canopy Growth's. Assuming cannabis legislation passes that allows the company to list its shares on a major U.S. stock exchange, look for that market cap gap to narrow.

Are there any losers?

Most marijuana stocks will win in some way if the Democratic win back control of the Senate and pass cannabis reform bills. Will there be any losers? Yes and no.

Innovative Industrial Properties (NYSE:IIPR) will face increased price competition if something similar to the SAFE Banking Act becomes law. The company buys properties from U.S. medical cannabis operators, and then leases the properties back to the operators. This is an attractive way for cannabis operators to raise cash since their access to traditional banking services is limited.

Going forward, though, banks in states where cannabis has been legalized will almost certainly begin to open their doors to cannabis customers. This would likely cause IIP to lower its lease rates to be more competitive and exert pressure on the company's profit margin.

In this respect, IIP could be a loser from this week's election results. However, the company could also win in another way. Cannabis reform could create new opportunities for IIP over the long run as cannabis operators expand and more companies enter the market.

Overall, the Democratic victories in Georgia bode well for marijuana stocks. Even the apparent losers could emerge as winners.