Twilio (NYSE:TWLO) has been a top performer on the stock market over the past year. Share prices for this cloud communications specialist have more than tripled, thanks to a big spike in revenue as more organizations have shifted from physical contact centers to cloud-enabled ones in the wake of the novel coronavirus pandemic.

The bad news for potential new investors is that Twilio shares have become extremely expensive, as evident from a price-to-sales (P/S) ratio of nearly 31. As a result, potential shareholders concerned about the stock's valuation might be hesitant to buy in.

Fortunately, there is an alternative to Twilio that's trading at a much cheaper valuation, has been delivering impressive growth quarter after quarter, and has delivered terrific stock price gains over the past year. It's still more reasonably priced as well. That stock is Bandwidth (NASDAQ:BAND), and it could be an ideal bet for investors looking to take advantage of the rapidly growing cloud communications space without paying a heavy premium. Let's see why.

Bandwidth switched into a higher gear in 2020

With a P/S ratio of 13, Bandwidth trades at a significantly lower valuation when compared to Twilio. But what's impressive is that it is no slouch either when it comes to revenue growth, closely matching its more popular peer on that front, as the chart below indicates. 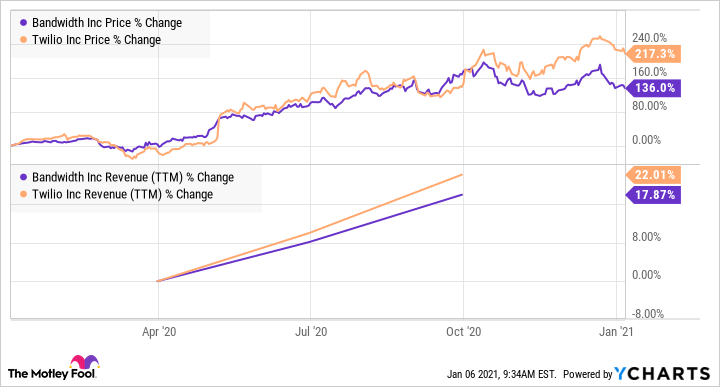 Bandwidth has reported results for the first three quarters of 2020 so far, and its revenue for those nine months has increased nearly 35% compared to the prior-year period. More importantly, Bandwidth's growth has started accelerating of late, as its revenue for the third quarter of 2020 was up 40% year over year to $84.8 million.

The communications-platform-as-a-service (CPaaS) segment, which accounted for 87% of Bandwidth's revenue last quarter, grew at a much faster pace of 43% over the prior-year period. What's more, the company had also raised its full-year revenue outlook when it reported its last round of results at the end of October 2020.

So, Bandwidth stepped on the gas last year as demand for work-from-home connectivity solutions increased. The company benefited from its partnership with major unified-communications-as-a-service (UCaaS) companies such as Zoom Video Communications, Microsoft, Dialpad, Alphabet's Google, and RingCentral, among others, that use Bandwidth's platform to deploy voice and messaging applications.

The good news for Bandwidth investors is that the company looks capable of sustaining its high growth rates in 2021 as well.

According to analyst estimates compiled by Yahoo! Finance, Bandwidth could deliver nearly 40% top-line growth once again in 2021. It won't be surprising to see Bandwidth hit that mark thanks to higher spending by customers and an expanding base of clients.

In the third quarter of 2020, Bandwidth saw a 25% spike in the active CPaaS customer count. But the more impressive thing to note here is that its existing customers ramped up their spending on the company's offerings. Bandwidth's dollar-based net retention rate for the third quarter came in at 131%, up from a 116% rate in the year-ago period.

Bandwidth management points out that its "dollar-based net retention rate compares the CPaaS revenue from customers in a quarter to the same quarter in the prior year," so the growth in this metric bodes well for the company. More importantly, the dollar-based net retention rate could move further north thanks to its recent acquisition of communications-as-a-service provider Voxbone.

Voxbone generated an estimated $85 million in revenue in 2020, up 25% from the prior year. The company has a presence across more than 60 countries and boasts of customers such as Uber, 8X8, and Zoom, among others. It operates in the telecom API (application programming interface) market that's reportedly clocking a compound annual growth rate (CAGR) of over 17%, according to third-party estimates.

So, Bandwidth has added a fast-growing service to its portfolio through Voxbone that could see interest from its existing customer base. On the other hand, Bandwidth can also cross-sell its suite of solutions to Voxbone customers. And finally, the CPaaS market that Bandwidth operates in presents a secular growth opportunity for the company as it is reportedly clocking a CAGR over 34%, according to Mordor Intelligence.

All of this indicates that Bandwidth's growth is here to stay. So, it would be a good idea for investors on the hunt for an affordable cloud communications play instead of Twilio to consider going long Bandwidth as it could remain a top growth stock in 2021 and beyond, thanks to a solid customer base and favorable end-market conditions.