There was a time when communications platform-as-a-service (CPaaS) provider Bandwidth (NASDAQ:BAND) was considered inferior to larger competitor Twilio (NYSE:TWLO) because of its tepid growth rate and the latter's best-in-breed reputation and strong clientele. But that isn't the case anymore.

Bandwidth stock has more than doubled in 2020. But don't be surprised to see the momentum continue in the coming months -- the business it is in is getting a shot in the arm in the wake of the novel coronavirus pandemic. 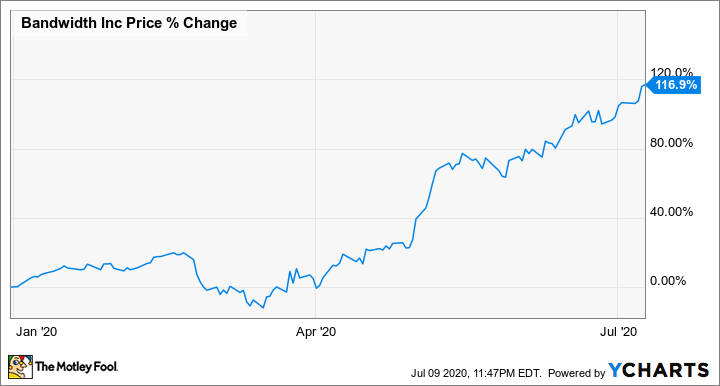 Bandwidth has stepped on the gas

Bandwidth was suffering from poor top-line growth around three years ago compared to rival Twilio. But that has changed. 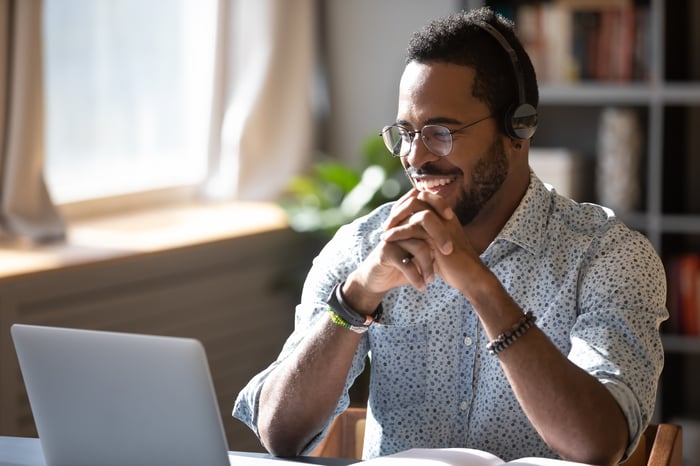 Clearly, Bandwidth's business has gained terrific momentum as shelter-in-place orders and lockdowns have led to an increase in remote work activity, boosting demand for the company's solutions. An increase in demand from providers of unified communications as a service (UCaaS) and meeting solutions turned out to be a tailwind for Bandwidth as organizations turned to services such as Zoom Video Communications to remain connected with their colleagues while working remotely from their homes.

Bandwidth CEO David Morken made this clear on the latest earnings conference call:

Our CPaaS revenue performance was also bolstered by customers that are experiencing increased demand for work-from-home connectivity solutions. This includes business VoIP providers and customers in UCaaS and meeting solutions verticals. We have served many of these types of customers for years including Zoom, RingCentral, Microsoft, Google and Dialpad, among others.

Bandwidth pointed out that its top five meeting customers "experienced an aggregate 66% increase in usage in March as compared to the average of the first two months of the quarter." What's more, its top 10 UCaaS customers witnessed an aggregate increase of 45% in usage during the same period.

This increase in demand for meeting applications and work-from-home connectivity solutions helped Bandwidth record a 34% annual increase in its customer base. It finished the quarter with 1,808 active CPaaS customers.

More importantly, the company's clients are spending more on its services, as was evident in the impressive annual increase in its dollar-based net retention rate, which came in at 126% during the quarter as compared to 111% a year ago.

The higher that number is over 100%, the better. This metric compares the revenue generated by Bandwidth's CPaaS customers in a quarter to the same quarter in the year-ago period. The increase in the dollar-based net retention rate indicates that Bandwidth's customers increased their usage of its services. The company pointed out that remote work requirements triggered by COVID-19 added 4 percentage points to its dollar-based net retention rate last quarter.

The good part is that Bandwidth could continue to add more customers and generate more money from its clients in the aftermath of the pandemic.

Bandwidth stands to gain from the move to a work-from-home environment in the wake of the pandemic, and it expects the remote working trend to continue even after the virus goes away.

This is evident from a recent survey of 150 executives at large U.S. corporations carried out by the Conference Board. The survey found that 77% of human resource executives expect employees to keep working from home even a year after the outbreak is brought under control. Such a scenario is also unfolding in other countries such as India, where major IT firms such as TCS, Infosys, and Wipro want work from home to become a permanent feature.

As such, don't be surprised to see a bump in demand for Bandwidth's offerings in the forthcoming months that should help the company sustain its momentum.

Another thing to like about Bandwidth stock is that it is currently cheaper than its more illustrious rival Twilio by a fair margin. While Twilio trades at 25 times sales, Bandwidth trades at nearly half of that multiple. Of course, Bandwidth's growth last quarter may not be as exciting as Twilio's revenue jump of 57%, but it wasn't anything to scoff at either.

Bandwidth has raised its full-year CPaaS revenue guidance for 2020 to a range of $246.8 million to $248.3 million, which would be a jump of 25% over 2019. Overall revenue is expected to increase by 21% this year, which would be a nice bump over last year's growth. So don't be surprised to see Bandwidth remain a top growth stock and deliver more upside in the future as COVID-19 drives a shift in workforce habits that could act as a tailwind for the company.

This Growth Stock Has Doubled in 2020, and It Could Still Soar Higher @themotleyfool #stocks $BAND $TWLO $ZM Next Article
Current