Shares of Northern Genesis Acquisition (NYSE:NGA) were trading higher on Monday. The special-purpose acquisition company (SPAC) is preparing to merge with electric-bus maker Lion Electric, which revealed in a regulatory filing last week that Amazon (NASDAQ:AMZN) has secured an option to purchase a stake in the company.

Lion Electric is a small Canada-based maker of electric trucks and buses. The company agreed to merge with Northern Genesis last year in exchange for funding; the deal is expected to close by the end of March. 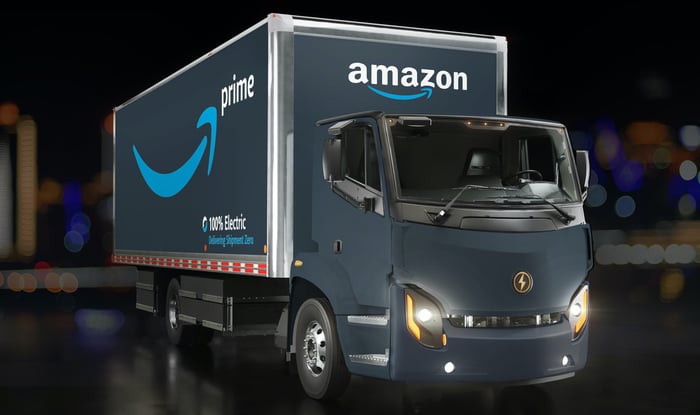 Lion said last fall that Amazon had ordered 10 trucks. It turns out that was just the beginning of what could be a 10-year relationship. Image source: The Lion Electric Company.

In a Securities and Exchange Commission filing related to the merger last week, Lion Electric revealed a deal with Amazon that goes deeper than had been previously reported. The key provisions:

Lion said last fall that it had begun delivering an order of 10 trucks to Amazon. It now appears that those 10 trucks were intended to give Amazon an opportunity to test the vehicles in service. Assuming that Amazon likes Lion's trucks and asks for all 500 per year, this will turn out to be a pretty big deal for a small start-up. It's why Northern Genesis stock rose last week and continued its run on Monday.

A deal for 5,000 trucks over 10 years may not sound like a whole lot. But when you consider that Lion's current factory can make just a few thousand vehicles a year, that's clearly a big agreement for the company. It certainly helps auto investors understand why Lion wanted to do the merger deal with Northern Acquisition, which will provide it with enough capital to build a second, larger factory in the United States.