If you could pick one stock that embodied the unpredictable volatility, and unprecedented weirdness, of the year 2020, Hertz (OTC:HTZG.Q) would be near the top of the list. While Hertz's downfall amid 2020's travel restrictions made sense, the company's stock went on a wild ride that included burning billionaire hedge fund manager Carl Icahn, an unfathomable near-900% spike from late May to early June, filing for bankruptcy protection, and an inevitable delisting from the New York Stock Exchange (NYSE). With all that said, the company is still making big moves and traders are still buying and selling the stock, so are Hertz shares really worthless?

Let's start with the blunt truth: Hertz is a bankrupt company and its shares have been delisted from the NYSE. With that out of the way, there are a couple of questions that investors seem to have, so let's try to sort them out.

First, many are likely wondering: If the company is bankrupt, why is it still operating and why are its shares still trading? Hertz is classified as an essential business, which means it will continue to operate with cash on hand while the bankruptcy process unfolds in court. There are a number of possible outcomes, but the most likely scenario is that Hertz restructures and emerges as a new company with new shares, while the former Hertz common shares are canceled and become worthless.

Second, if the previous statement is true, why are traders still buying and selling the stock? Let's tackle this question in two parts: How traders are still buying and selling, and why. The "how" is simpler to answer, as being delisted from the NYSE, or other major stock exchanges, isn't the end of the world for investors holding common shares. However, it significantly changes the world those investors live in, as the shares are instead traded "Over-the-Counter" (OTC). This has much more relaxed regulations and the shares are less liquid. Finra.org notes that investing in bankrupt stocks generates a median monthly return of -15%, making it a large gamble for investors that often doesn't pay off in the end. 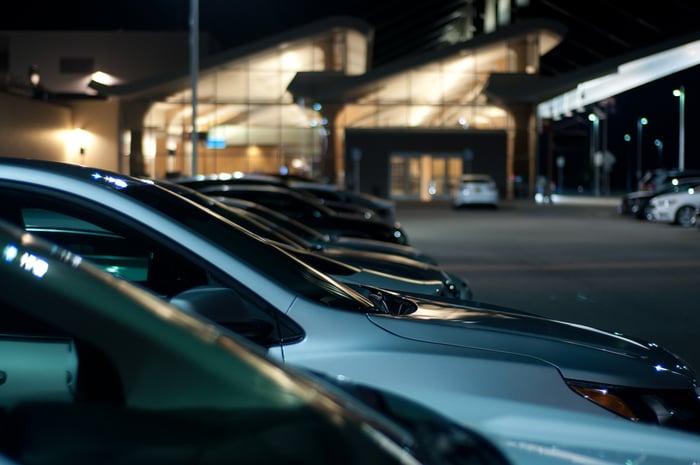 That's the "how" part of the question. The "why" part is a little less transparent. The simple truth -- and it's become obvious over the past few months -- is that many common shareholders don't understand the bankruptcy process. Many don't seem to realize current common shareholders will likely receive no value for their shares, as they are the last in the pecking order compared to senior lenders. The senior lenders must be satisfied before common shareholders receive anything, and because Hertz has such a substantial amount of debt, it's highly unlikely any value will be left over.

In some cases common shareholders can receive a little value if all senior lenders are satisfied, or if those lenders essentially decide to gift common shareholders something to avoid a fight. Don't count on this happening with Hertz. Right now traders of common shares are playing a speculative game of musical chairs, but someone will end up with a harsh seat on the floor and nothing to show for it.

Don't believe me? Here's Hertz telling you itself: "We also expect our stockholders' equity to decrease as we use cash on hand to support our operations in bankruptcy. Consequently, there is a significant risk that the holders of our common stock will receive no recovery under the Chapter 11 Cases and that our common stock will be worthless." That's according to Hertz in its 10-Q for the period ended Sept. 30, 2020.

To answer "Is Hertz stock really worthless now?" literally, the stock still currently holds some value and can still be traded. However, an appropriate analogy would be to call Hertz stock a dead man walking. There is a very high probability that it's not a matter of if, but when, shares become worthless amid the company's restructuring and emergence as a new company with newly listed shares.

Don't be confused when you hear about Hertz raising $5 billion to buy 229,000 vehicles to update its fleet. That move is highly complicated, highly risky as transportation demand may not return as fast as Hertz needs, and is designed to better position the future Hertz company, and corresponding new shares, to rebound if the transportation sector surges in 2021. But the current Hertz common shareholders will not benefit from that scenario. In fact, it puts additional big dogs ahead of the common shareholder at the negotiation tables during restructuring. Hertz common shares aren't worthless today, but maybe more investors should treat them as such.