Best Buy (NYSE:BBY) bargained its way into success during the pandemic. Thanks to its retail positioning and an unexpected surge in the demand for electronics, Best Buy saw its revenue and earnings spike amid business restrictions. But Best Buy's share price did not seem to reflect these gains. With COVID-19-related restrictions now likely to recede, let's see what the next year might hold for this retail stock.

Best Buy over the last 12 months

Despite its recent performance, Best Buy is an underappreciated star in retail. Under CEO Corie Barry, the company shifted more company sales and customer interactions online as the pandemic hit. Best Buy also benefited from higher sales across nearly all product categories. Even after enduring forced closures for much of the year, the company managed to increase its net earnings per share by 23% for the first nine months of the current fiscal year.

On top of the increased sales, the company fattened its profits by cutting sales, general, and administrative (SG&A) expenses in the first and second quarters. The company achieved those cuts by slashing labor, incentive, and ad expenses. However, after second-quarter earnings, the company announced that it had backtracked on these cuts as stores resumed operations. In the latest quarter, SG&A expenses rose 8% from year-ago levels. These rising expenses indicate that the company may not sustain its current profit growth levels.

Also, despite Best Buy's profit growth, its shares underperformed peers such as Amazon and Walmart. Additionally, though its earnings slightly exceeded those of Target, Target's stock grew at more than double the rate of Best Buy over the last year.

Furthermore, Best Buy's growth has not translated into significant valuation growth. Best Buy stock sells for a trailing P/E ratio of about 17, which is just above its five-year average multiple of 15. But it's still trading lower than Target's multiple of 26 and Walmart's valuation of just over 21. Like most other retailers, it also trades at a small fraction of Amazon's P/E ratio.

Moreover, Best Buy investors have little reason to believe that the valuation will increase anytime soon. Analysts predict a forward P/E ratio of 14, implying that growth will probably slow further in the foreseeable future.

Best Buy has done little to dispel negative perceptions regarding earnings. In its most recent earnings, the company did not provide any definitive forward guidance. But in Best Buy's Q3 2021 conference call, the company indicated that sales trends would probably grow more slowly in Q4. It also cited inventory constraints, higher supply chain costs, and a higher proportion of online sales as some of the reasons for the slower growth. Best Buy did not offer a definitive plan to address these issues in the long term, though it does expect lower payroll expenses to partially offset these higher costs.

Moreover, its 2020 electronics sales benefited as more people stayed at home. Now, the public has begun to receive the vaccine. As a result, demand for home-based entertainment could ease as the pandemic recedes, according to CFO Matt Bilunas. 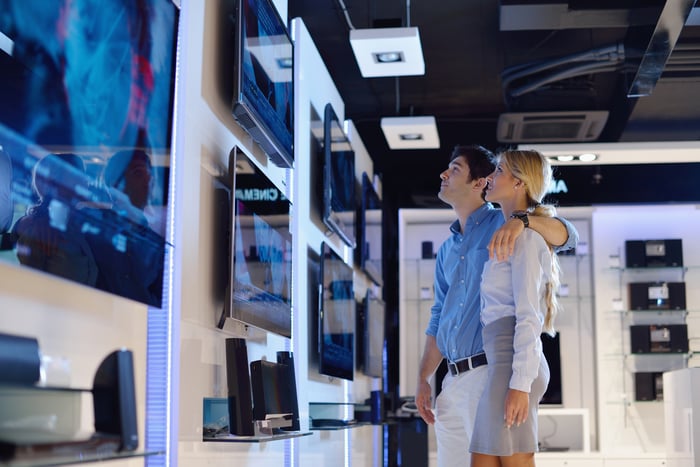 Additionally, some analysts have outlined reasons for their bearish stances. Goldman Sachs analyst Kate McShane describes Best Buy's valuation as "near peak." She believes the pandemic pulled some durable goods spending forward into 2020. This makes such spending less likely to continue into 2021, which could add further pressure to the sales numbers.

Best Buy in one year

As a company, Best Buy has prospered under extremely tough competitive conditions. Unfortunately, this success has not fully translated into stock gains. Despite the low multiple of Best Buy stock, investors have failed to appreciate its strength and performance.

This tempered growth in the stock price may indicate that investors believe the recent surge in sales will not last. Forecasts by both management and analysts point to this slowdown or possible decline in profit growth. At least in the near term, this could rob Best Buy stock of the catalyst it would need to move higher.