As the philosopher Heraclitus put it 1500 years ago, "The only constant in life is change." The world is changing because people are changing, and the stock market itself is changing as a result.

There is one constant within the chaos, though. That is, a bargain is always worth a closer look from investors aiming to get the most risk-adjusted bang for their buck. And right now, The Allstate Corporation (NYSE:ALL), AbbVie (NYSE:ABBV), and Lockheed Martin (NYSE:LMT) are particularly undervalued value names. 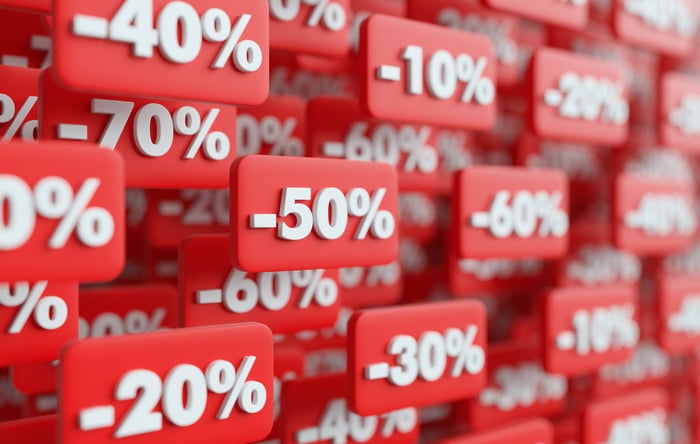 Investors' money is in good hands with Allstate

When COVID-19 first took hold in the United States last February, investors were rightfully concerned that it might take a toll on Allstate's top and bottom lines. Not only would the insurer's life and business-continuity payouts likely ramp up, the pandemic would make it tough for the company to sell new plans. In the second quarter of the year, Allstate even refunded $738 million (in the form of a credit toward future premiums) to its automobile insurance customers, since lockdowns meant they weren't driving as much. From February's peak to March's trough the stock lost 45% of its value, and unlike so many other stocks, this one's yet to reclaim February's price levels.

As we look back at the insurer's results through the first three quarters of 2020, though, it becomes clear the market may have overreacted.

For the nine-month stretch ending in September, revenue is only down 1.3%, and adjusted net income is actually up by about 2%. The contagion appears to have actually prompted a bit of new business, though the company's "Transformative Growth" initiative that was already in place by the time the pandemic took shape meant Allstate was ready enough to do something constructive -- and profitable -- with this fresh interest.

The market still doesn't seem to be giving the company full credit for its surprising resiliency.

AbbVie is going to be fine without Humira

Drugmaker AbbVie is a tough name to handicap. Its Humira isn't just an effective treatment for arthritis, plaque psoriasis, and a handful of gastrointestinal ailments. It's also one of the world's best-selling drugs, accounting for $19.6 billion worth of 2019's top line of $33.3 billion.

However, Humira's U.S. patent protection will wane in a big way next year, with "generic" biosimilars of the drug expected to become available beginning in 2023. Although it will take time for all of its patents to expire, it's an inevitable reality, and a big part of the reason shares are still down 12% from their 2018 high despite rallying 68% from their 2019 low -- investors just aren't sure the company is ready for life after Humira.

But it's a degree of concern that may simply may not be merited. While it's unlikely any one single drug will ever be able to replace Humira, don't think for a minute Abbvie is simply sitting on its hands feeling sorry for itself. Its existing drug portfolio not only has lots of potential for expanded uses, its pipeline isn't too shabby either. The pharma giant is also the name behind cancer drug Imbruvica, which saw sales growth of 29% in 2019, while its sales of $3.9 billion through the first three quarters of a COVID-crimped 2020 are up 14%. At its peak, the company believes Imbruvica will be able to drive annual revenue of up to $7 billion, though the figure of $10 billion has been tossed around on occasion.

It's not just Imbruvica, though. CEO Richard Gonzalez has recently alluded to the possibility that drugs Rinvoq and Skyrizi could drive up to $20 billion worth of annual sales between them at their full stride. They're jointly driving less than $2 billion in yearly revenue now.

The point is, investors may be underestimating just how solid Abbvie's post-Humira future will be.

Lockheed Martin is ready to blast off

Finally, add Lockheed Martin to your list of value stocks that have become too cheap to ignore.

Like most stocks, Lockheed tumbled in February and March of last year when COVID-19 made landfall in the United States. Unlike most stocks, Lockheed didn't follow through on the recovery effort that took shape in April. Shares of the defense contractor reached new multi-month lows just this week, as investors struggle to figure out where the company fits in the next era of defense. Its F-35 fighter jet is now the preferred aircraft for many military forces across the world, but a new U.S. President may also usher in a new kind of military readiness...here, and abroad. In the meantime, any future military conflict is as likely to take place in space as it is on the ground or in the air, with satellites (and the information they transmit) being an increasingly important aspect of an army's capabilities.

Lockheed Martin is better prepared for whatever the future may hold than most investors seem to be giving it credit for, though.

For starters, the company was already part of the space defense movement before President Trump officially established the Space Force as a sixth branch of the U.S. military in late 2019. Lockheed is in fact the maker of the U.S. Air Force's space-based infrared missile-launch detection system which has been in use for nearly a couple of decades. And, although the Air Force is now looking for a next-generation replacement, the branch has once again tapped Lockheed Martin to build three such satellites at a total cost of around $5 billion. Moreover, less than a month ago the company announced its intent to acquire Aerojet Rocketdyne (NYSE:AJRD), bringing a wide array of new technology to the table including hypersonic weaponry that's become critically important of late. In the meantime, though around 600 F-35 jets have been delivered to-date, the company estimates it will make and sell around 3,000 of them before they're replaced by next-generation aircraft. Not only does each jet represent around $100 million worth of revenue, but also represents millions of dollars' worth of annual maintenance contracts.

In short, the global commitment to the F-35 as well as the company's history of success in outer space translates into a long revenue-growth runway. Investors may not see it, but analysts sure do. The consensus price target of $431 is 28% higher than the stock's current price.