Some people like the thrill of the gamble. Others would prefer to bet on the house. Jumia (NYSE:JMIA) and Costco (NASDAQ:COST) are like two sides of a casino coin. Jumia is the risky wager; it's short on profitability but long on potential. It's an early leader in Africa's still nascent e-commerce market. It may take years before achieving viability, but with a modest $3.5 billion market cap, the ceiling is high.

Costco is the safe bet; it's the proven all-weather winner. The ceiling isn't as high as what you will find in the exposed beams of its warehouses -- or in Jumia -- but the floor is solid. Is Costco or Jumia the better buy? Place your bets. 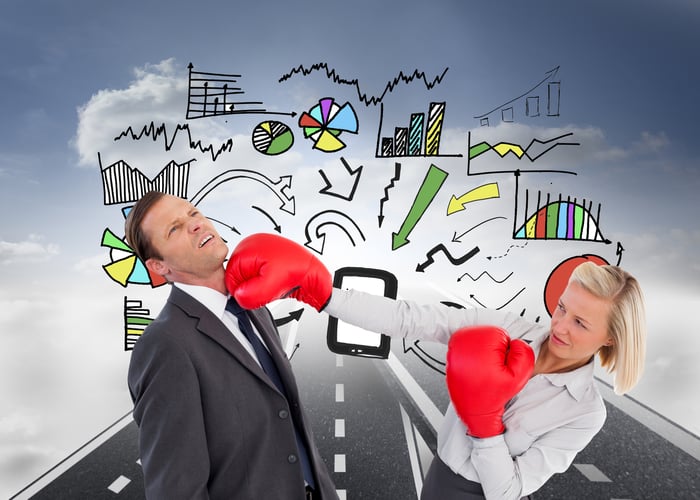 Costco is the company most know well, so let's start there. It operates 803 mammoth warehouse clubs with a penchant for value. Expansion is methodically slow, especially now with more than 30% of its locations outside of its home U.S. market.

You know what you're getting in Costco. It has rattled off eight consecutive fiscal years of positive single-digit revenue growth. This fiscal year that ends this summer will likely be a rare trip into low double-digit top-line growth. The pandemic has played an important part in making Costco even more popular at the individual store level. Last week it announced a 12.3% increase in net sales for the five-week period ending Jan. 3. Comps soaring 10.7% worldwide did most of the heavy lifting. Costco has now posted seven consecutive months of fuel-adjusted comps in the double digits. It's not sustainable, but as we've seen over the past few years great things can happen with single-digit growth, too.

Costco also pays a steady quarterly dividend. The current yield of 0.8% may not seem impressive, but it has peppered its results every couple of years with one-time bonus payouts like the $10-per-share special dividend last month that boosted its theoretical yield above 3%.

By now it may seem as if Costco is a sleepy retail stock with a beloved brand and time-tested business model. It doesn't mean that Costco is sleeping. Its digital initiatives are working, and e-commerce comps soared better than 86% in its latest quarter -- something that can't be said for Jumia.

Jumia was one of last year's hottest stocks. It was a six-bagger in 2020, but it doesn't mean that it's growing briskly these days. It has posted declining revenue through each of the first three quarters of 2020, and the slides have widened with every passing quarter. In most developed nations e-commerce came to the rescue in the pandemic, but in Africa things have played out quite differently.

Jumia is doing things right. It's playing a starring role in e-commerce and payments processing in a territory where most people are still hesitant about trusting an online platform if they're able to get connected at all. Jumia is putting in the work. It's helping build up the fulfillment infrastructure that didn't exist before. Something as simple as an address system that we all take for granted just doesn't exist in some pockets of the African continent. Jumia is taking the financial hit to educate the market. It will have earned the spoils when the day comes that Africa is major e-commerce market.

Investors will have to be patient with Jumia. Revenue growth will return this year, but profitability is still several years away. Jumia investors know that there's a good chance that they will strike out if they swing for the fences, but they should also know that it will take a long time before a well-hit ball clears the outfield fence here. Costco may be a weak infield single, but it's a high-percentage play. It's a bunt single with good legs. There's nothing wrong with slow yet steady growth -- getting on base is the easiest way to eventually score. Costco is the better buy here, and that is the case even for investors with the risk tolerance to go with a high-beta investment like Jumia.

High ceilings are great, but something tells me that floors are going to matter in 2021.