Please ensure Javascript is enabled for purposes of website accessibility
Log In Help Join The Motley Fool
Free Article Join Over 1 Million Premium Members And Get More In-Depth Stock Guidance and Research
By Bradley Freeman - Jan 15, 2021 at 11:30AM

What makes this company so well-positioned for success?

Online gambling in America is set to enjoy 14.78% annualized growth through the year 2025. A big part of that outsized growth will be thanks to a wave of sports gambling legalization hitting the states.

Penn National Gaming (PENN 0.62%) is the best positioned to enjoy this movement, and should be considered regardless of its soaring share price -- here's why.

Penn and Barstool: a match made in heaven 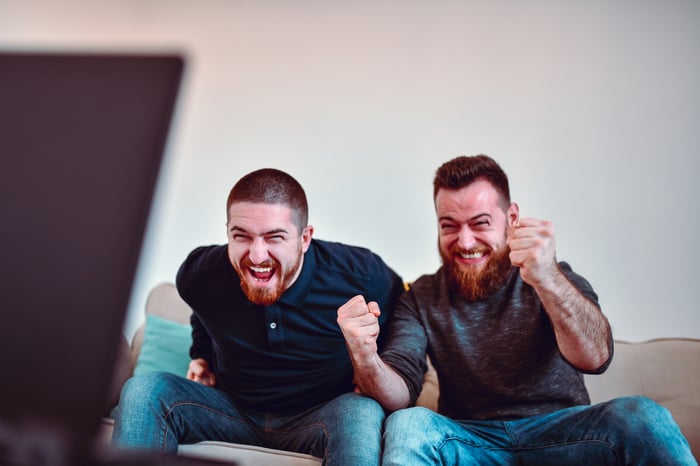 Early last year, Penn struck a deal to purchase 36% of the sports-media conglomerate Barstool Sports at a $450 million valuation. The company has options to raise its equity stack to 50% -- what does Barstool mean for Penn?

As of 12 months ago, Barstool Sports attracted 66 million monthly active users (MAUs) to its content. The makeup of this audience is also ideal, with roughly 40 million of those MAUs gambling on sports. To put that into context, the American Gaming Association forecast 33.2 million gamblers for the entire National Football League (NFL) season.

It gets better: Barstool's audience also skews younger and more male than Penn's had before the acquisition -- exactly the audience sports gambling attracts.

To take advantage of this gigantic following, Penn and Barstool together released Barstool Sportsbook, first in Pennsylvania late last year -- the response was encouraging. The digital sportsbook broke the record for total downloads for its first weekend while only being available in one state. The product has already racked up 12.4% online market share in the state in just a few months going up against already established products from DraftKings and several others.

What makes this even more noteworthy is that Penn spends virtually nothing  on external marketing. It merely relies on Barstool's clout to power the sportsbook's success. Seemingly, Barstool is the path of least resistance for customer acquisition, which is important based on the low-margin nature of sports gambling.

The product will debut in Michigan this month when the state rolls out its program. It's feasible to think Penn could take market share even more quickly than it did in Pennsylvania considering it will enjoy first mover advantage -- it was late to the party in Pennsylvania.

The legalization momentum doesn't appear to be slowing, either. This week, New York Governor Andrew Cuomo expressed his strong motivation to legalize digital gambling in his state. The COVID-19 pandemic has thrown a wrench in New York's budget, and this is one of the ways Cuomo plans to cope.

With the pandemic devastating every single state financially, this could be a sign of things to come.

Not just a sportsbook and not just digital

Penn National Gaming gets a lot more out of Barstool than a digital sportsbook. Barstool boasts two of the top 20 podcasts in the nation and enjoyed its most profitable year of growth in 2020 despite sports temporarily pausing. Across social media platforms its personalities attract tens of millions of followers.

Additionally, Penn National will be using the excitement created from Barstool and the sportsbook to better its brick-ang-mortar portfolio as well. The company is actively transitioning its physical assets to Barstool's brand to best capture its momentum. If that wasn't enough, Penn plans to open Barstool-branded entertainment destinations in urban centers. These will function similarly to nightclubs with a sports and gambling theme.

Penn is ideally positioned to enjoy the outsized growth online gambling (and sports gambling specifically) will provide. Its Barstool partnership simplifies the path to success immensely, and its usage of the Barstool name has been effective and expedient thus far.

Regardless of the recent run-up, Penn National Gaming is a stock to continue betting on for the long term.