Please ensure Javascript is enabled for purposes of website accessibility
Log In Help Join The Motley Fool
Free Article Join Over 1 Million Premium Members And Get More In-Depth Stock Guidance and Research
By Alex Carchidi - Jan 15, 2021 at 7:02AM

These baby biotechs are itching to come out of their shells.

In your portfolio, you probably have a few stocks that you consider to be relatively safe, and a few that you think might be on the riskier side -- which could reward you with a faster rate of growth. Assuming that your portfolio is balanced and sufficiently diversified, it's not a bad idea to invest in small-cap stocks that could drive big returns.

Today, I'll be discussing a pair of biotech stocks that are toward the riskier end of the spectrum, so buckle up. Neither of these companies have a product yet, and their revenue is dependent on drug development agreements with larger collaborators. However, this year will likely send both stocks into overdrive -- assuming that everything goes as planned. 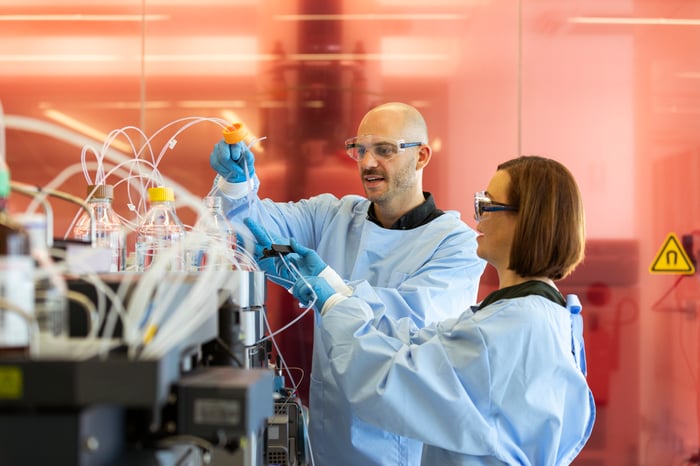 Surface Oncology (SURF 2.29%) is a little-known biotech that's angling to make drugs that target the tumor microenvironment in tough-to-treat cancers. Aside from its taking on a notoriously tough niche as its mandate, I'm bullish on Surface in 2021 because it has a handful of (early) milestones that will allow the market to start recognizing the company's value.

In the first half of this year, Surface will present clinical data from two of its three phase 1 clinical programs. One of the programs is for late-stage renal cell carcinoma, whereas the other is for solid tumors in pancreatic or gastric cancer. These data updates will be quite significant for its stock, as it will be the first time that investors will have a chance to get a feel for how the company's lead programs are moving forward.

In the second half of the year, it'll file an investigational new drug application with the Food and Drug Administration, thereby paving the way to start clinical trials with human subjects shortly afterward. This may not directly catalyze the stock's growth, but it will widen Surface's pipeline and make sure that there are future opportunities for investors as the project matures.

Overall, it's important to remember that Surface is still a very young biotech company, and it's a very risky investment as a result. I suggest analyzing how the clinical safety data it reports holds up to that of competing products before deciding whether to invest. If its therapies look like they're safe, early investors will see their shares balloon in value, but there will probably still be plenty of future upside for those who come after.

Jounce Therapeutics (JNCE -10.57%) is a small but dynamic cancer immunotherapy company that's inching closer to its day in the sun. Right now, it has three clinical-stage programs, all of which are wholly owned. Thanks to diligent progress over the last couple of years, Jounce's stock is ready to take off in 2021, even if its lead immunotherapy projects still need a few more years before they're ready to apply for regulatory approval.

Late last year, Jounce was added to the NASDAQ Biotechnology Index, meaning that it meets certain requirements for its market capitalization and trading volume. That's a positive sign for its trajectory as an investment, as being part of the index will draw more attention to the stock. Jounce's presentations at two investor conferences -- H.C. Wainwright BioConnect 2021 and the 39th Annual J.P. Morgan Healthcare Conference -- also attracted attention to the company.

Later in the year, Jounce will report preliminary data from its phase 2 clinical trial for vopratelimab, its immunotherapy for solid tumors. It'll also provide a safety update from one of its programs in phase 1. While safety is always a concern during clinical trials, for immunotherapies it's especially important, as some modalities can carry the risk of severe side effects. Favorable results aren't guaranteed, but if things look good, Jounce's stock will get a bump.

Potential buyers should keep an eye on Jounce's clinical results accordingly. For aggressive investors, it's appropriate to buy the stock right now. Given that its cash holdings of around $200 million are sufficient to keep the company in operation through 2023, your equity probably won't get diluted in the short term, making it an even sweeter deal.