Please ensure Javascript is enabled for purposes of website accessibility
Log In Help Join The Motley Fool
Free Article Join Over 1 Million Premium Members And Get More In-Depth Stock Guidance and Research
By Rich Duprey - Jan 15, 2021 at 10:35AM

Consumers turned to plant-based beef alternatives during the last shortage; more may do so this time around.

Panic buying may start to creep into grocery stores again as new cases of COVID-19 grow and a new strain of the virus first found in the U.K. has now been identified in at least nine states. And researchers just identified two new strains originating here in the U.S.

While consumers learned to grapple with shortages of cleaning and sanitation supplies during the first outbreak last year, one of the more difficult ones to cope with was the meat shortage that followed as processing and packing plants were shut down or operated at reduced capacity.

We could face another shortage soon as these protein processing plants brace for the next wave of the virus to sweep the country. But that may be an opening for Beyond Meat (BYND -4.43%) to win over new consumers again. 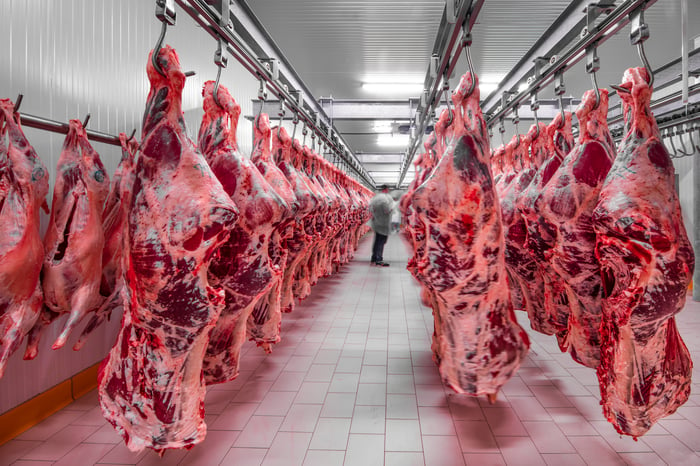 Planting the seeds of disruption

Bloomberg reported last month that Cargill temporarily idled one of its Canadian plants as a result of a COVID-19 outbreak among its workers (it's since reopened the plant). The world's top meat producer, JBS (JBSAY 3.13%), sent home thousands of workers because of the resurgence, as has Smithfield Foods; and Sanderson Farms (SAFM 0.48%) has been suffering from more workers calling in sick.

While vaccines for COVID-19 are now being distributed, it will still be months before a critical mass of the public is vaccinated, leaving meatpacking plants vulnerable to further disruptions. Iowa State University says beef and pork production remain below last year's levels.

It was in just such an environment last year that Beyond Meat saw its sales surge, and a new meat shortage could cause that to happen again.

A record response to shortages

Beginning in the second quarter last year, Beyond Meat saw record numbers of consumers buying its plant-based meat alternatives and stockpiling them in their freezers. Although its third-quarter results continued to be hurt by the restrictions imposed on the foodservice industry, an important component of Beyond Meat's business, the retail segment, remained robust.

U.S. retail sales jumped more than 40% while international retail sales were 26% higher. Combined, they were just barely enough to offset the downdraft in the foodservice segment, which left total sales just 2.7% higher.

Year to date, Beyond Meat's retail sales more than doubled over the same period in 2019, which suggests the meat alternative has attracted new customers to its products, and they continue to buy them.

Fighting with one hand behind its back

Shares of Beyond Meat are down 37% from their October peak and are only 5% above where they traded a year ago, before the coronavirus pandemic took hold.

Yet the stock seems pricey, trading at almost 20 times sales and its book value, even as it continues to regularly generate losses for investors. But don't be fooled, Beyond Meat should be able to grow into that valuation.

Right now it's operating with half its business not fully functional because the foodservice segment continues to limp along. That's going to get worse during the winter as restaurants face the cold reality of limited or no indoor seating, and few options for outdoor dining. But this will eventually pass, and in the meantime, Beyond Meat can lean on its retail operations, particularly as it opens new factories that give it new capacity to meet demand.

Ready to bulk up

Bulk food-delivery specialist Heartland Foods is noticing an increase in the number of people buying six months' worth of food to beat a potential food shortage, with its own sales up 45% year to date compared to last year.

Heartland vice president for sales Justin Freishtat attributes the increase to COVID-19 changing the way families eat. "Families are reverting back to core values," Freishtat says. "People are eating out less, and staying home, and eating around the dinner table more."

Consumers might choose not to buy six months of Beyond Meat beef, chicken, or pork products, but with fewer selections of actual meat in a supermarket's meat case and a strong desire for healthy foods, suppliers of plant-based meat alternatives may just see sales resume their meteoric rise.